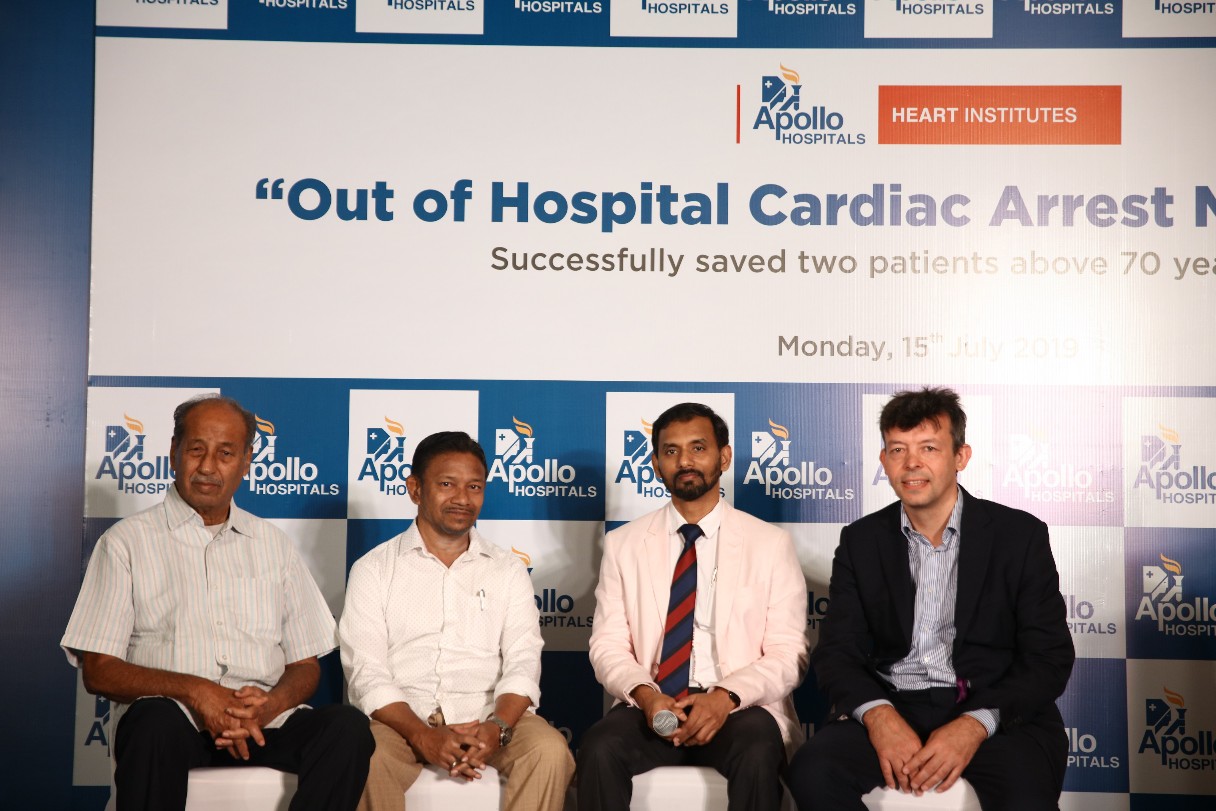 Almost 8 lakh people die off sudden cardiac arrest every year in India with over 80% of these emergencies occur outside a hospital setting. On average, a victim begins to suffer irreversible brain damage 4 minutes after the cardiac arrest takes place if no CPR. Cardiac arrest is sudden stopping of heart function, resulting in loss of effective circulation (absence of heart beat with lack of blood supply and oxygen eventually leading to death). It includes a TRIAD of unconsciousness/unresponsiveness; loss of normal breathing; loss of pulse and blood pressure. The unpredictable and time-sensitive nature of Out of Hospital Cardiac Arrest (OOHCA) makes it a unique medical emergency. 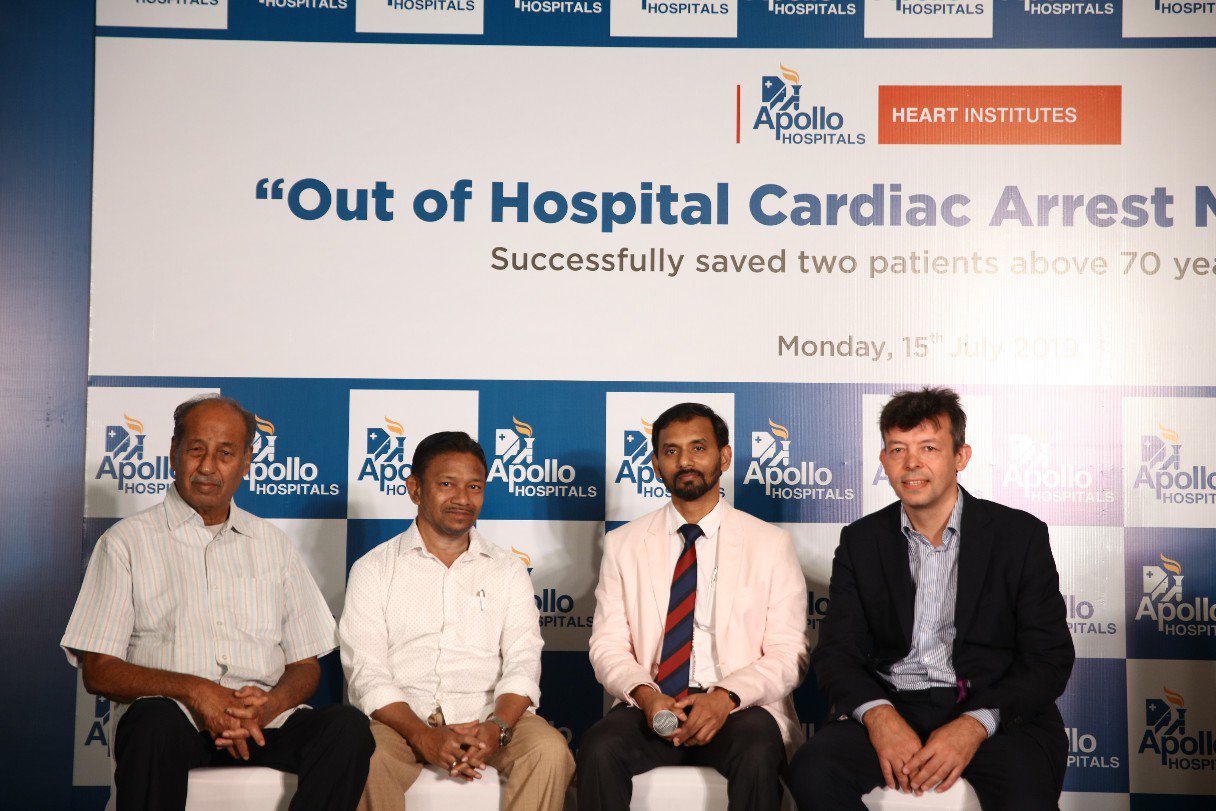 The most common cause of OOHCA is cardiac disease, particularly coronary artery disease (CAD) and other structural heart diseases, such as cardiomyopathy. Only 25% to 30% of patients with OOHCA initially achieve return of spontaneous circulation (ROSC) and are admitted to the hospital. The outcome of these patients even after admission in hospital remains low due to the damage created to the other organs by the lack of blood supply, at the time of arrest.
Apollo Hospitals Chennai is a pioneer in reviving patients who are brought to the Emergency Room with an OOHCA emergency. The specialists from Apollo Hospitals under the guidance of Dr. Refai Showkathali, Senior Interventional Cardiologist, Apollo Hospitals Chennai recently gave a new-lease of life two patients who suffered an Out of Hospital Cardiac Arrest.
78 year old man who developed chest pain collapsed on the way to the hospital, on arrival to Apollo Hospitals Emergency Room he was immediately connected to a ventilator and underwent CPR and his hear beat revived. He underwent a special balloon inserted to support the heart pumping. Angiogram showed 100% block in his heart blood vessel and therefore emergency angioplasty was performed to open the blocked vessel under the guidance of Dr. Refai Showkathali. His blockage also was filled with chalk material (“calcification” in medical terms) and has to have special drilling technique called rotablation to help pass the stent. The patient’s heart pumping functions improved slowly over the next few days and was discharged from hospital.
Another gentleman, in his 60’s woke up one morning in June 2018 at home with some giddiness and he went to a clinic to see a doctor, and collapsed in the reception. He underwent resuscitation there immediately and had an ECG done which did not show any major issue. He was shifted immediately to Apollo hospital, he was semiconscious and his BP was extremely low. Therefore his lungs were secured with intubation and he was put on a ventilator. An urgent echocardiogram (heart scan) showed large collection of fluid around the heart and that is putting a lot of pressure on heart (In medical terms, this is called as cardiac tamponade) preventing the heart to pump normally. He was immediately shifted to the cardiac catheter lab to remove the fluid. The procedure was carried by Dr Refai Showkathali, and around 250 ml of fluid was removed from around the heart. Immediately after removing the fluid, the blood pressure started to improve and the heart started to function normally. He was then taken to cardiac intensive care unit for 24 hours and moved to room. The fluid collection was found to be due to his underlying kidney problem. He was discharged from the hospital in few days and he is undergoing regular treatment for his kidney problem.
Discussing the cases Dr Refai Showkathali, Senior Interventional Cardiologist, Apollo Hospitals Chennai, said, “These 2 cases highlight the importance of timely cardiac intervention for patients who had OOHCA by a team of experts, who are available in the hospital 24/7 in hospitals like Apollo Hospital. In these patients, every minute of delay in intervention can make the outcome worse, as the blood supply to all other organs are provided by the heart. Not only the timely cardiac intervention, but also the holistic care by team of doctors such as Emergency physicians, Intensive care doctors and the nursing care have a huge impact to get successful outcome.
Real progress in OOHCA outcomes may only be achieved by a team of dedicated emergency specialists and Interventional Cardiologist who can lead the management of these patients with the support of other medical team. This has shown remarkable improvement in the survival of these patients in various studies. Timely intervention increases the chances of survival when the patient reaches to specialised healthcare units. We have many examples of these patients who survived OOHCA and walked out of the hospital.