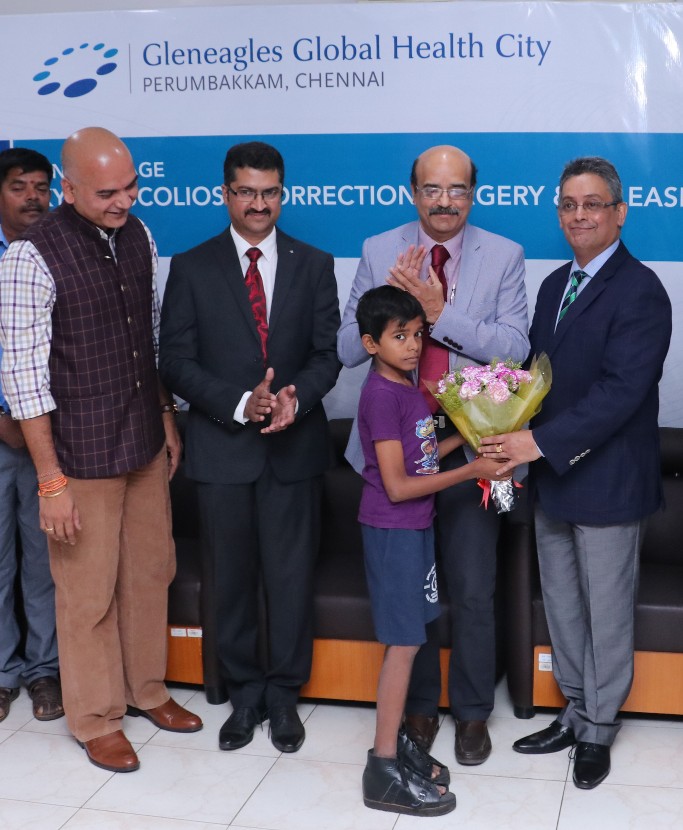 A 12 year-old boy from Kanchipuram district of Tamil Nadu was diagnosed with lipomyelomeningocele causing tethering of the spinal cord. Lipomyelomeningocele, is an abnormal fatty mass that grows inwards to the spinal cord. The rare spinal defects caused tethered cord syndrome where the spinal nerves become adherent at the bottom of the spinal canal, making the spinal cord less able to grow as the child grows and causes traction on the cord. Doctors at Gleneagles Global Health City performed 11-hours marathon surgery in two stages, the first stage involved the debulking of the mass and thereby releasing the cord and the second stage was to correct the deformity with instrumented fusion. 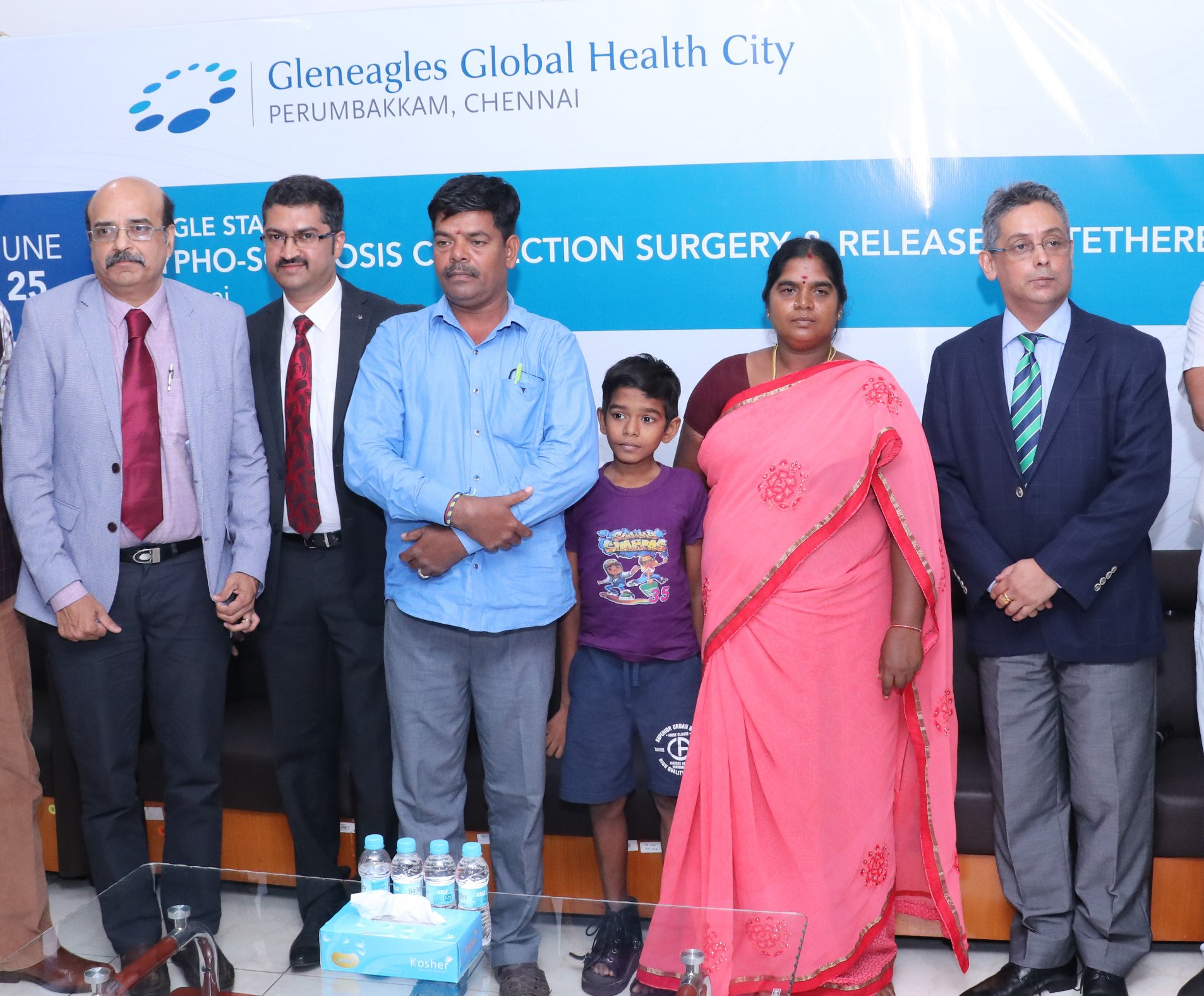 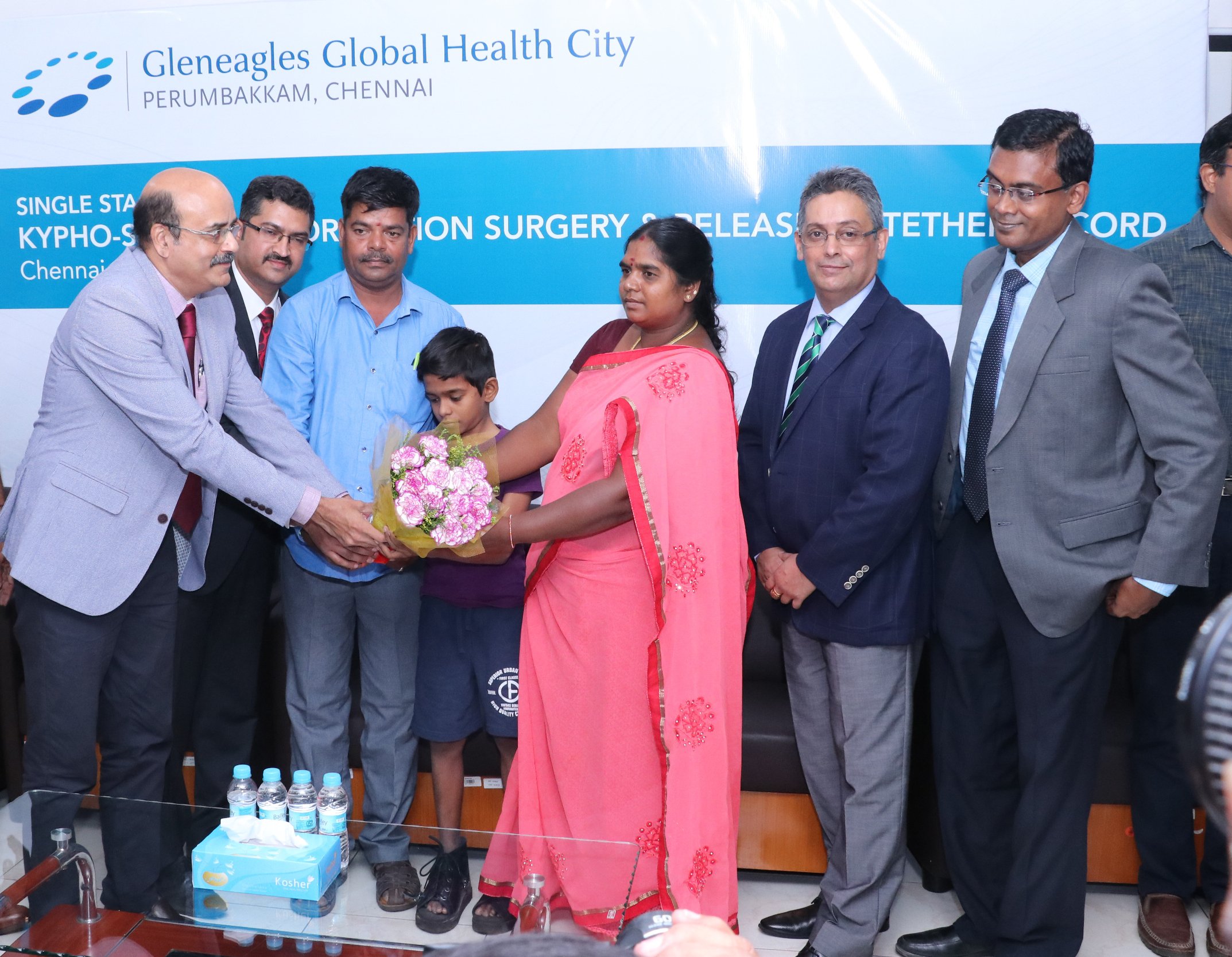 The child was brought to Gleneagles Global Health city for medical attention due to a swelling at the lower back and spinal deformity causing progressive posture abnormalities which had developed since a very young age. The boy was complaining of weakness in the right leg causing him to drag his foot while walking and was hence, unable to play like other children. The boy had issues with his bladder and developed pressure sores on his right foot due to lack of sensation. He had an obvious spinal deformity due to scoliosis. Spinal X-rays and CT Scans of the boy revealed thoracolumbar complex scoliosis deformity, with structural abnormalities of the lower thoracic and lumbar vertebral bodies at multiple levels. In simple terms, his spine was badly twisted and deformed.

Dr Nigel Peter Senior Consultant Neuro surgeon and Dr PhaniKiran S, Senior Consultant Spine Surgeon along with a team of Neurosurgeons, Spinal Surgeons, Neuro-Anaesthetist, Critical Care physicians and Paediatricians had multiple meetings to discuss the surgical strategy to correct such a complex, three-dimensional spinal deformity plus debulking of lipoma and release of tethered cord. The expert team had counselled child’s parents about the magnitude of the surgery and the possible risks and complications of their child being paralysed after the surgery, infection and bleeding.

Speaking about the surgery, Dr Nigel and Dr PhaniKiran said that they had decided to perform the surgery in two phases in a single stage so as to avoid second surgery, given the advantages of less blood loss, faster recovery, less risk of infection and wound healing problems. The First phase was debulking of the lipoma and release of the cord. After exposure of the lumbosacral spine, laminectomy was performed above the level of the lipoma, and at the level of lipoma, the bone was already absent. Dura was found to be expanded and tense with an extradural component of the lipoma. At this stage, the operating microscope was used for separation of the lipoma from the nerves and cord. After opening of the normal dura above the lipoma, the spinal cord and the lipoma located at the dorsal aspect of cord were exposed. The spinal cord was found tight and tethered by the lipoma. Lipoma was carefully excised and dissected from the nerves under the operating microscope and its dural and vascular attachments were separated. After adequate debulking of the lipoma, the spinal cord was released and showed significant relaxation and the dura was sutured in a water-tight fashion. During the entire procedure, the neuromonitoring did not reveal any injury to the nerves and cord. His blood loss was replaced with blood products.

The second phase of the surgery was the correction of deformity with instrumented fusion. The correction of this complex deformity needed an osteotomy in the spine, which involves taking out a wedge of bone at the deformed level and making the spine un-stable first, followed by correcting the deformity as much as safely possible and stabilising the spine with the implants in that position. The initial step was to insert screws into the carefully selected levels in the spine and pelvis without causing any damage to the nerves. Then the osteotomy was performed and a mesh cage was inserted in the bony gap created, followed by correction of the deformity using the screws and rods.

A tethered cord syndrome with lipomyelomeningocele, with complex kypho-scoliosis is a rare association said, Dr Nigel Symss. These congenital anomalies can occur individually or together. Early diagnosis followed by surgery can prevent weakness or paralysis of lower limbs, and bladder and bowel dysfunction, which can occur due to the traction on the cord. Also, early detethering of the spinal cord can also prevent future progression of scoliosis. Lack of awareness and the social stigma and misconceptions associated with these deformities is often the reason for the parents not seeking medical attention at an early stage. The most important factor that may help reduce the severity of the problem is early detection and treatment, added Dr PhaniKiran.

Following the marathon surgery, the boy was extubated and shifted to the Neuro ICU where he was closely monitored by a specialised team of neurocritical care doctors. He was made to sit up and walk on the second day after his surgery. His vital parameters remained stable and the postoperative period was uneventful. He had no worsening of his already existing weakness of the right leg. He was transferred to the ward on the third postoperative day and discharged home on the seventh day after surgery. He was able to walk independently at the time of discharge and is currently undergoing rehabilitation, bladder training and physiotherapy to strengthen his lower limbs.

Dr Dinesh Nayak, HOD Neuro Sciences said ‘Spinabifida and neural tube defects occur 1 in 1000 live births and these unfortunate children have miserable life due to leg weakness as well as loss of bladder and bowl control which in later life can lead to kidney Failure and death. Early screening, detection and specialized intervention by Neuro Surgeon and spine surgeon can potentially prevent limb weakness as well as bowl and bladder dysfunction prevention of these abnormalities include simple measures like consuming folic acid before pregnancy, avoiding unnecessary medications and screening for these abnormalities during early pregnancy.