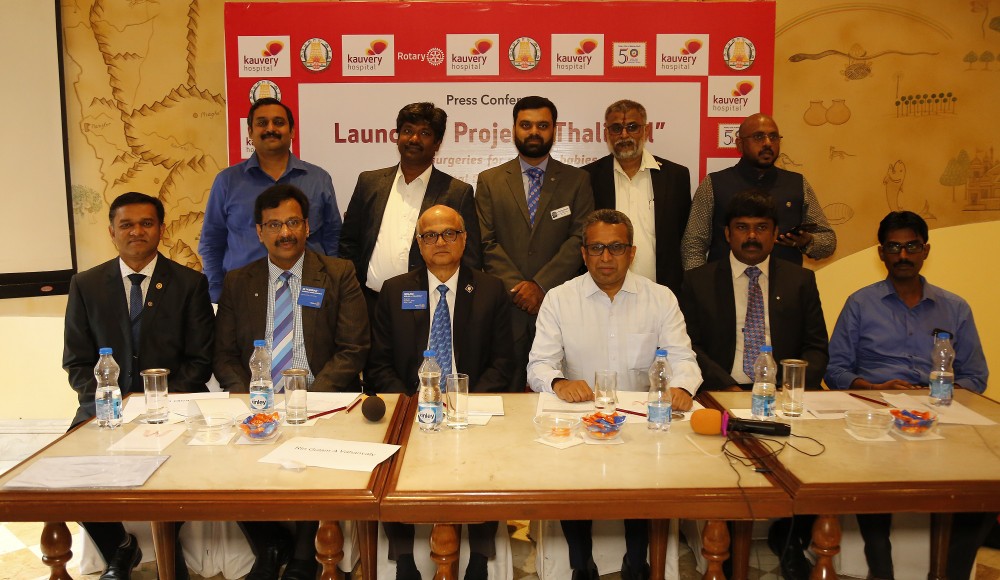 Kauvery Hospital, a leading multi-specialty and tertiary care hospital chain, has announced ‘Project Thalirgal’, a new initiative in asscoiation with Rotary Club of Madras North and Government of Tamil Nadu to provide no cost corrective surgeries for treating congenital abnormalities in the Spine and Brain for babies. 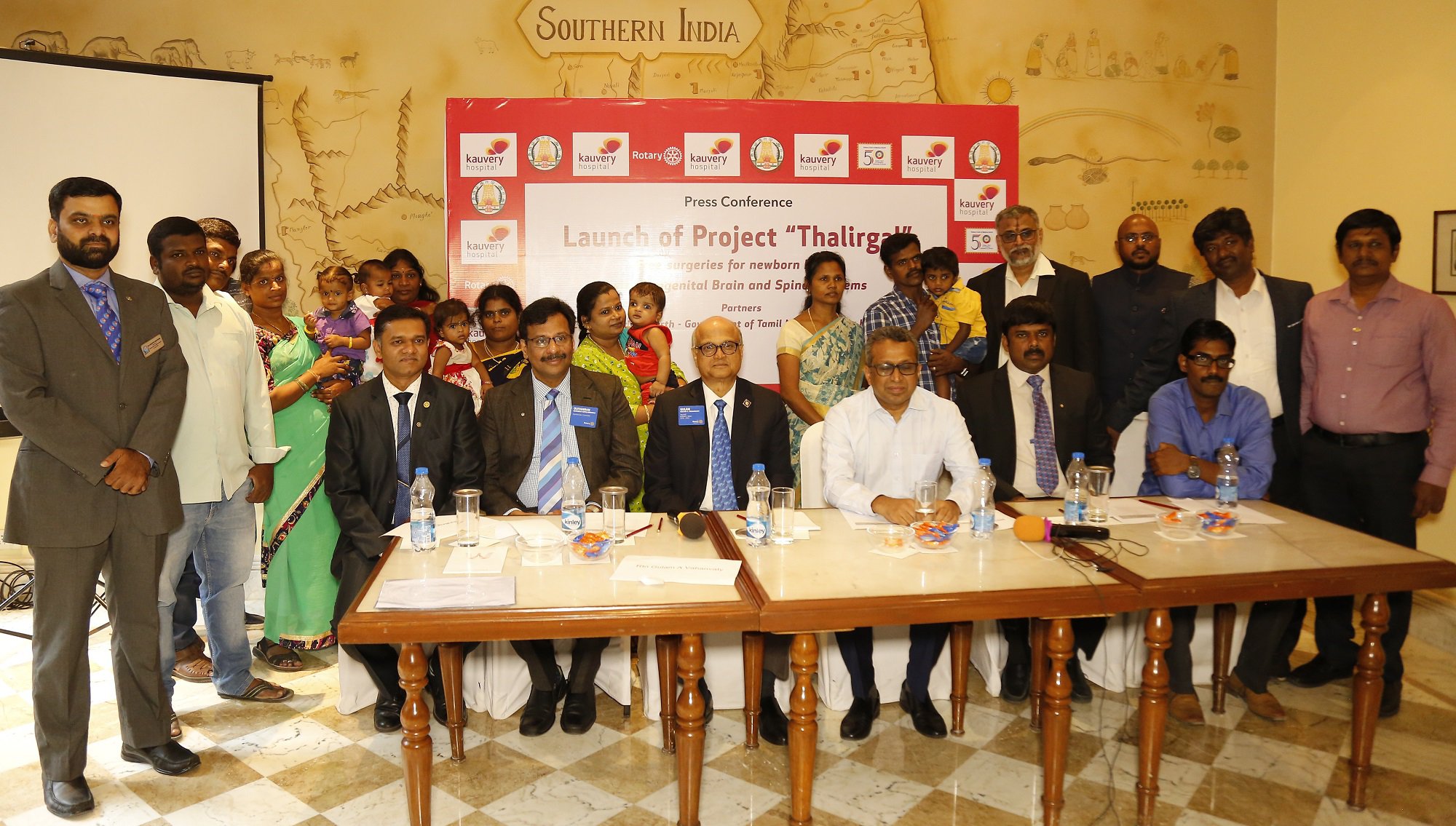 Project Thalirgal involves a three-way partnership between the Government of Tamil Nadu, Kauvery Hospital and Rotary Club of Madras North. Helping the underprivileged sections of the society to meet the financial requirements and giving a new lease of life to babies with congenital abnormalities, Kauvery hospital has stepped forward to provide surgical treatment with advanced medical facilities at a subsidized value. In addition to the costs covered by the CM Health Scheme, the remaining subsidized expenses will be borne by Rotary Club of Madras North which has raised a total grant of approximately 50 lakhs rupees from across the world with the help of Rotary Foundation.
As part of the program, the Government Institutions and other centres will help identify babies who require surgery and perform the necessary pre-operation investigations. After the necessary investigations are completed, the baby will be taken to Kauvery Hospital for the surgery, which will be performed by Dr.G Balamurali, Consultant Spine and Neurosurgeon along with his team. Once the surgery is completed, the baby will be shifted back to Government Institution for post-operative care, or treated in Kauvery Hospital itself.
As a pilot study, Kauvery Hospital has successfully performed the surgery on 39 babies with the support of hospital subsidy and no doctor’s fees. The lives of these babies have been transformed.
Project Thalirgal, looks to provide an opportunity for babies born with congenital abnormalities, survive and to lead a normal life. The project will also help to educate and train sonologists to detect birth defects during pregnancy at an earlier stage and create awareness among pregnant mothers on how one can prevent congenital birth defects in the first place. The project will also help train other surgeons and nurses in the care of such children.
Speaking about the project, Dr. G Balamurali, Senior Consultant Spine and Neurosurgeon, Kauvery Hospital said, “Through this project, various congenital abnormalities of the spine like spina bifid, myelomeningocele, tethered cord, scoliosis and abnormalities in the brain like hydrocephalus and encephalocele can be treated. There are several challenges in the treatment and care of these babies and with the support of Kauvery Hospital management, Government funds from schemes and grants from Rotary Club of Madras North we have operated 39 babies free of cost. The operations have been very successful with excellent results. Some of them are very complex operations which requires a team of doctors including neurosurgeons, plastic surgeon, anesthetist and neonatologist. The babies are usually low birth weight (1.5 – 2.5 kgs), pre term and present in a very critical condition. If timely intervention is not done, we are likely to lose these babies. The Pubic – Private Partnership to deal with these rare complex problems is a very positive initiative to use expertise and advanced facilities in both healthcare systems to benefit patients. The disease prevalence and population of India requires such a model. With new International Funds that we have received from Rotary we can make a difference not just to several babies but also to their family and in turn to our community.”
Dr Aravindan Selvaraj, Executive director of Kauvery Hospital, Chennai is very commited to this cause, he said “Kauvery hospital has been a pioneer in delivering the best of the healthcare by leveraging on the advancement of medical sciences for the past 20 years. We firmly commit ourselves that these advanced surgical treatments be available to all sections of the society, including the underprivileged. Kauvery is proud to partner with Tamil Nadu Government and Rotary Club of Madras North for this noble cause.”

Past District Governor and Chairman of Golden Jublee celebration Rtn PDG Olivannan of the Rotary Club of Madras North spoke about the project and shared that “We, at Rotary Club of Madras North, have embarked upon a noble project, during the golden jubilee year, – Corrective Surgeries for Pediatric Congenital Spine and Brain Disorders, as well as follow up care to beneficiaries. In the first phase we would be doing surgeries for approximately 70 babies. The total cost of the project is US$46,750. INR 33 Lacs (approx.). This mammoth project was largely funded by The Rotary Foundation and adequately supported by the following Rotary Districts and Rotary Clubs Rotary Districts:- R C Madras North 3232 (India), R C of Bradley Sunrise 6060 and 6780, Clevland, USA), R C Kandy 3220 (Sri Lanka).”

Dr Arasar Seeralar who very recently retired as the Director of Institute of Child Heath, TN Government and who inititated this project from the government side has this to say ”Neural Tube Defects (Anomalies of the spinal cord and brain) were a neglected group of congenital anomalies with no hope for survival and quality life. The neuro surgeons were reluctant to handle because of the smallness of the baby and neurological disability that one may encounter later in life. About 2 to 3 babies were born per month in IOG with NTD. Our Honorable Health Minister during several of the review meetings would reiterate that every baby born should be ensured survival and quality life. It was this request that prompted me as HOD of neonatology at IOG to seek the expertise of the Neurosurgeons at Kauvery hospital who were readily willing to give comphrensive newborn care and surgery free of cost to these babies with spine and brain anomalies. The cost was met from CMCHIS scheme and donation from Philanthropist. Since then many babies were operated by the Team headed by Dr. Balamurali at Kauvery hospital with excellent results. Several babies delivered outside of IOG in the Chennai corporation Health facility and babies born faraway districts of TN have also benefited. ICH & HC , Egmore , Chennai was celebrating its Golden Jubilee last year and it found a right Partner in Rotary club of North Madras under the Chairmanship of Rtn PDG Olivannan also celebrating its Golden Jubilee Year and Kauvery hospital who benevolently committed to this cause. It is really heartening to know that more babies born with this defect are going to get a quality survival Hope. Like the Adage prevention is better than cure. We must educate women who are planning their family to take FOLIC ACID supplement during Periconceptional period and also undergo Anomaly screening at the right period of conception (13 to 18 weeks) to avoid birth of babies with NTD.”
For further information or for those seeking help under Project Thalirgal, please contact helpline number: +91 87544 56711