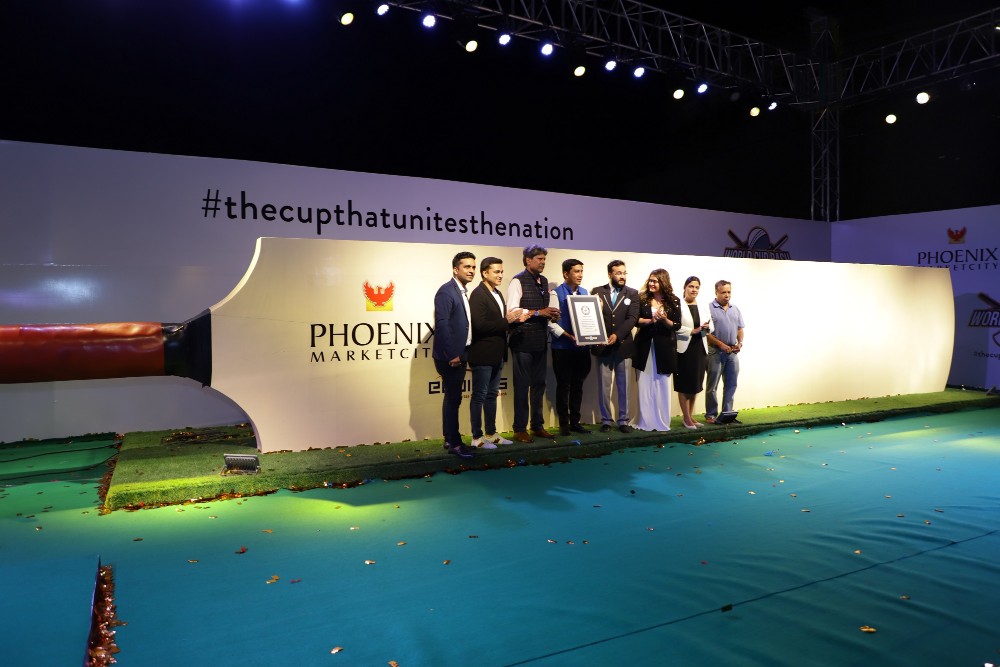 Phoenix MarketCity Chennai and Palladium set the GUINNESS WORLD RECORDS® for the title – Largest Cricket Bat on 14th June 2019 in Chennai. The bat weighing 6600 kilos, made from 6300 kilos of Willow wood; and 51 feet long; is made in accordance to ICC Cricket Standards. The grand unveiling of the bat was done by Cricket legend, Kapil Dev, in the presence of Mr. Swapnil Dangarikar, Official Adjudicator at Guinness World Records.

The malls geared up to be the ultimate destination for every Cricket and sports fan in Chennai, having started a campaign titled #TheCupThatUnitesTheNation. In an effort to take the World Cup celebrations to new heights, a host of thrilling activities and live entertainment revolving around the World Cup are planned within the premises.
Cricket enthusiasts from around the city yearned to sign good luck messages to their favorite Cricketer and to #TeamIndia on the bat.
Across venues within the malls, special AR/VR booths are set up to give Cricket enthusiasts a surreal experience of the game. In addition, live screening of all the India matches are being organised in the Courtyard. The Cricket frenzy fans had a comfortable, familiar and luxurious space to enjoy their favorite game as they cheer on for their favorite #TeamIndia.
And that’s not all, in addition to it there was a stunning visual spectacle, a larger-than-life Cricket Chrome Ball placed on an elevated grass surface. The reflective chrome ball gave patrons a thrill of being part of an international setup.

Commenting on the occasion Ms. Pooja Patti, Center Director, Phoenix MarketCity and Palladium, Chennai said: “This is the first time we, Phoenix MarketCity and Palladium, Chennai, have become official Guinness World Records® holder for the title – Largest Cricket Bat. The idea is to give a lifetime experience for our patrons and ardent Cricket fans across the city and world, an opportunity to be part of this unique and thrilling event. This is our way to cheer on, show support and boost the morale of #TeamIndia as they participate in the ICC Cricket World Cup 2019! It is a wonderful experience to see patrons celebrate their favorite game Cricket World Cup with friends and family at Phoenix MarketCity & Palladium”.
“I extend my heartfelt congratulations and good wishes for the noteworthy effort by Palladium and Phoenix MarketCity Chennai, to have become the official Guinness World Records Holder for – Largest Cricket Bat. It was a privilege to unveil the largest Cricket bat. The key factors that helps any sportsman, is the support and encouragement from the fans. It is more than just a colossal work of art, as it gives fans an opportunity to ride high on the spirit of sportsmanship and is indeed a fitting tribute to Team India, and the entire Cricket fraternity”, says Kapil Dev, Former Indian Cricketer, World Cup Winner 83’