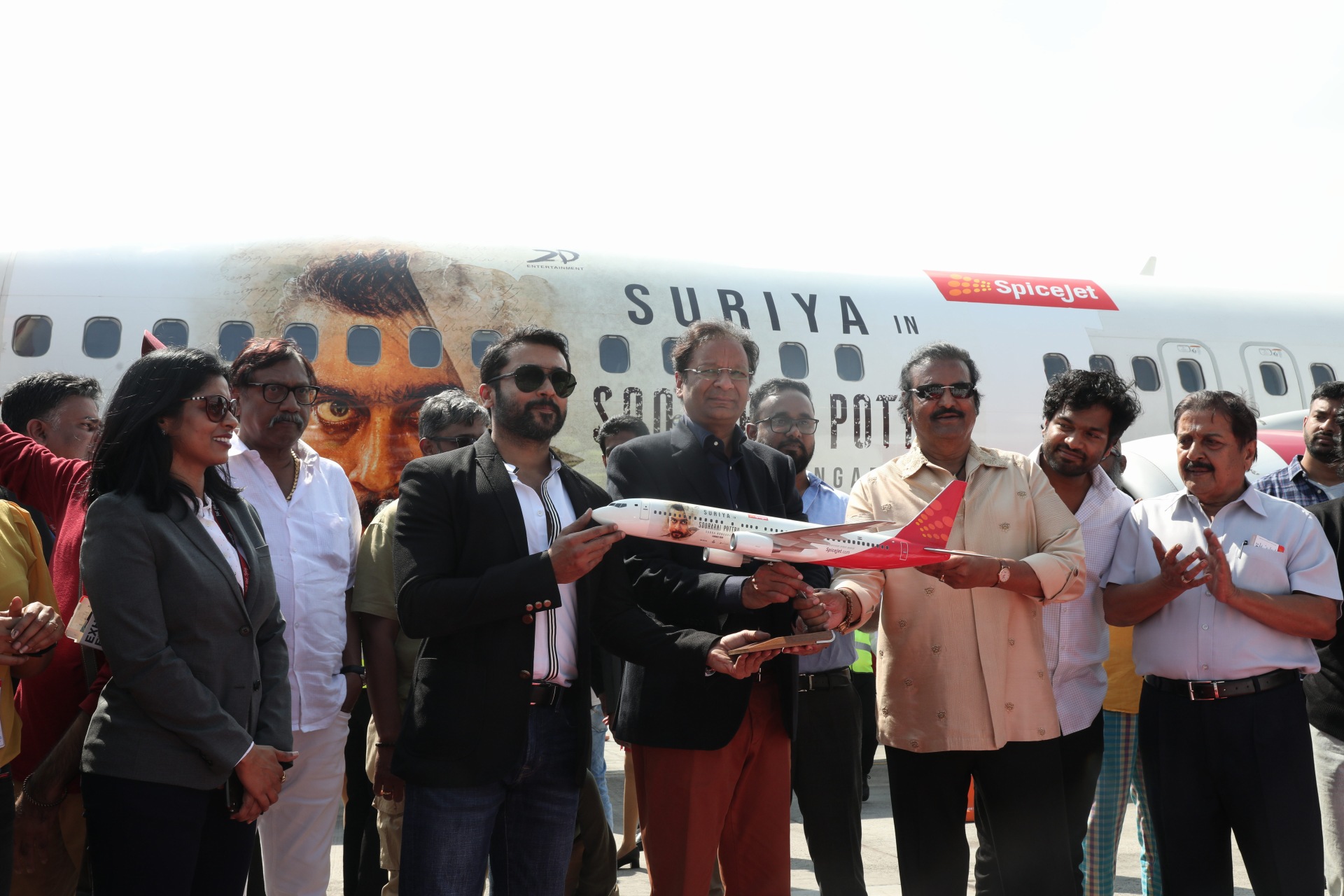 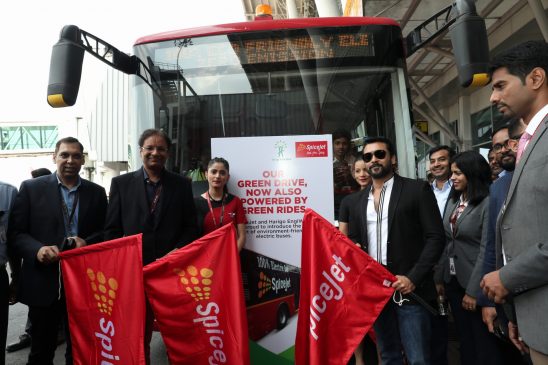 13, 2020: SpiceJet, the country’s favourite airline, is all set to herald a new
era in brand marketing. In an industry-first, the airline hosted the launch of a song from the
upcoming movie of Tamil film star, Suriya, inside the aircraft at Chennai International Airport.
The launch was the latest in a series of collaborations wherein popular brands have sought
access to SpiceJet’s most lucrative media asset, the aircraft livery, as a unique platform for
marketing promotions. The movie, Soorarai Pottru (Hail the Brave) stars Suriya in the lead.
SpiceJet announced its association as an airline partner for the film at an event aboard the
aircraft that was wrapped in the movie poster. SpiceJet’s Chairman and Managing Director,
Ajay Singh and Suriya released the much-awaited song ‘Veyyon Silli’ in the presence of other
co-stars.
SpiceJet is one of the most-preferred brands for marketing associations with renowned
celebrities and corporates. The airline recently promoted the release of superstar Rajinikanth’s
Darbar by unveiling the aircraft livery of the movie during Pongal. Last year, the airline tied up
with Flipkart for a massive ‘marketing in the air’ campaign where more than 10 aircraft were
wrapped in Flipkart Big Billion Day (BBD) decals and around 70 planes had BBD tags and
stickers on the passenger seats, to promote the sale. Leading brands like Paytm, Nestle,
Panasonic, Amazon, Netflix and many others have partnered with SpiceJet.
Ajay Singh, CMD, SpiceJet, said, “We are excited to be associated with Suriya and Team
Soorarai Pottru. The film’s theme resonates with SpiceJet’s grand vision of making every Indian
fly and I wish them the very best. Brand marketing is going through a major transition across the
globe and SpiceJet has been instrumental in partnering with brands to tell their story in a unique
way. Each SpiceJet aircraft is a ‘flying billboard’ which gives unmatched and unique visibility to
brands.”
Suriya said, “We are quite excited about 2D Entertainment’s collaboration with SpiceJet.
Twenty years ago taking a flight was still a dream for common people. I have had an experience
of an 18 hour bus journey from Chennai to Nagarkovil for a friend’s wedding.”
“It makes me happy that pioneers like Capt Gopinath and Mr. Ajay Singh, who is now the face
of Indian Aviation, have changed the scenario to make every Indian fly. When you give wings to
hope, no dream feels too big or impossible. This is something which our film “Soorarai Pottru”
resonates. I wish SpiceJet all the very best for its future endeavours and more importantly, I
appreciate them for taking innovative steps such as operating India’s first-ever BioJet Fuel flight
– a step in the right direction to promote environmental sustainability.”
Following the music launch, SpiceJet flew 100 first time flyers, comprising of children from
various Government schools and their teachers, around the skies of Chennai and gave them
the experience of a lifetime. These children were chosen with the help of Agaram, a NGO run
by Suriya and were asked to write essays about their biggest dreams. Their fellow passengers
included Ajay Singh, Suriya and the rest of the film’s cast that included veteran actor Paresh
Rawal and popular actors Apparna Balamurali, Oorvashi and Karunas. The kids enjoyed the
song and interacted with Suriya and the other actors.
The joy-flight comes close on the heels of Sapnon ki Udaan, SpiceJet’s signature
program, wherein the airline regularly takes underprivileged children on special joy flights. The
last Sapnon ki Udaan flight was held on the occasion of ‘Children’s Day’ last year, wherein 118
underprivileged children and adult patients battling cancer were taken on a joy-flight.
Another step towards sustainability
The event saw another milestone achieved by SpiceJet with a first-of-its-kind initiative taken in
Indian aviation sector. The airline introduced two electric tarmac coaches at Chennai Airport on
13th February, 2020 which were flagged off by Ajay Singh, CMD, SpiceJet and film star Suriya.
The initiative is in line with the Prime Minister’s commitment to reduce India’s carbon footprint
by 30% by 2030 under the Paris Climate Change Accord. By 31st May, 2020, SpiceJet will be
operating 15 electric coaches at the Chennai airport, followed by 10 coaches being introduced
at Ahmedabad airport between May and August, 2020.
Ajay Singh, CMD, SpiceJet said, “SpiceJet is committed to the objective of sustainability and
giving back to nature more than we take from it. The launch of electric tarmac buses at Chennai
airport is one such initiative that sets another benchmark of sustainability in Indian aviation with
reduced carbon footprints. We are in the process of introducing more electric buses at Chennai
and other airports soon and hope to make air quality more breathable.”
SpiceJet has always been at the forefront in practicing initiatives committed to sustainability.
This reflects in the initiatives like the launch of India’s first TaxiBot at Terminal 2, Indira Gandhi
International Airport, Delhi which saves up to 85% of fuel consumed during taxiing besides
substantial reduction of noise levels. SpiceJet is the first and only Indian airline to successfully
conduct the country’s first-ever BioJet Fuel powered flight which was operated on the
Dehradun-Delhi route in August, 2018. BioJet fuel has the potential of reducing carbon footprint
by 15%. Other green initiatives of the airline include plantation drives, solar power projects,
distribution of seed cards, Clean Ganga Fund, installing roof top solar panels in Majuli to
provide a complete village with clean power and many more. The airline has also initiated new
food packaging by reducing single-use plastic and therefore promoting a culture of recycling,
making them extremely environment friendly.