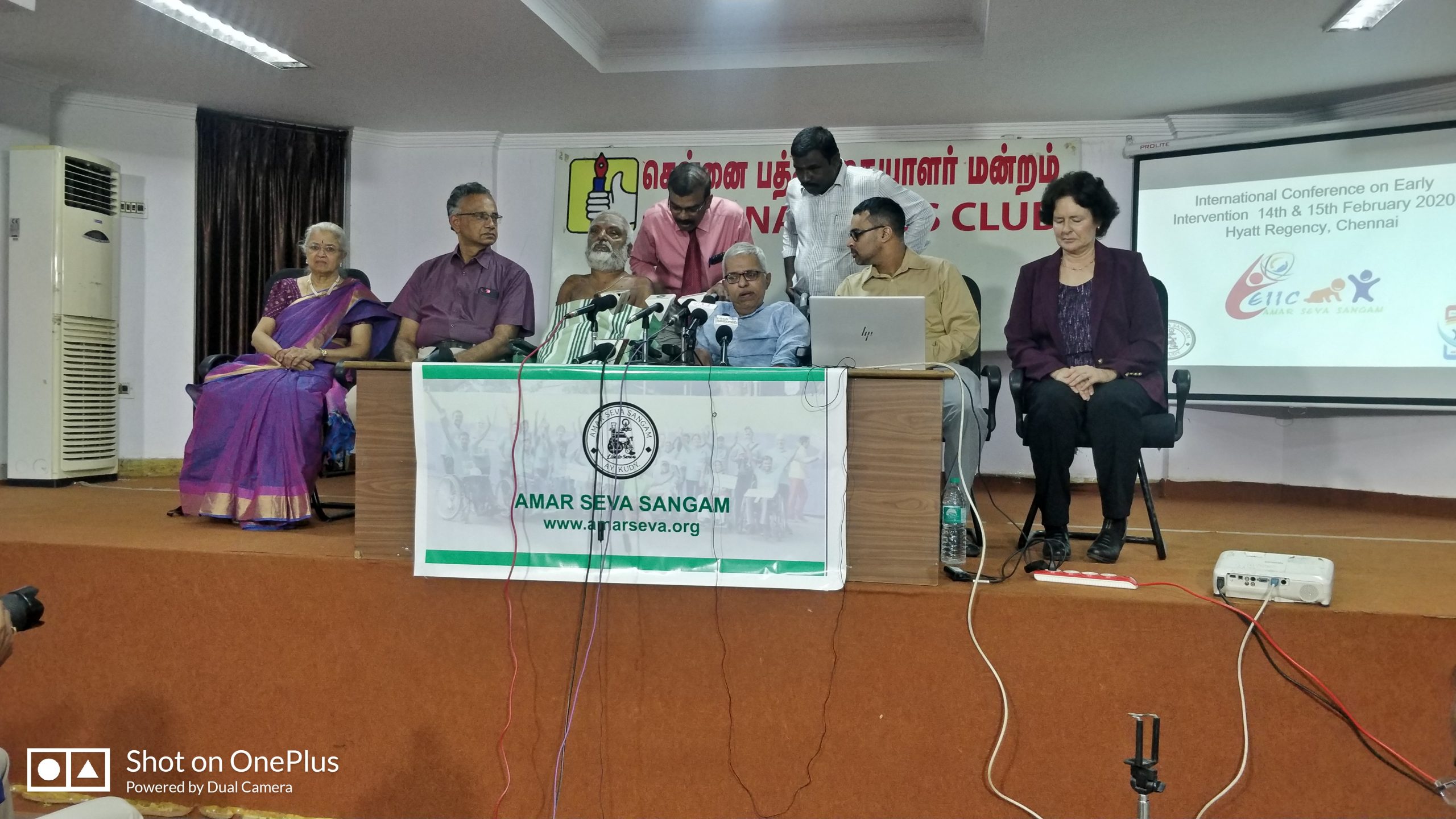 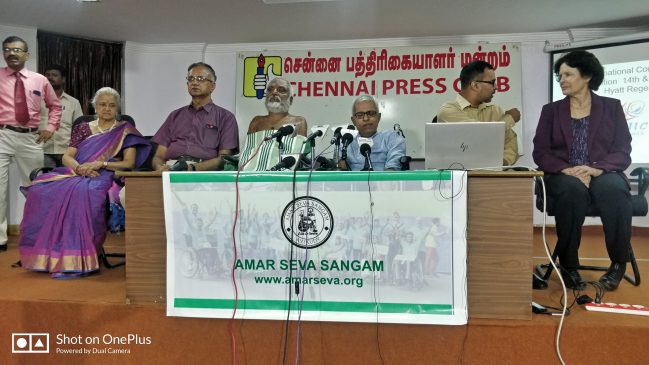 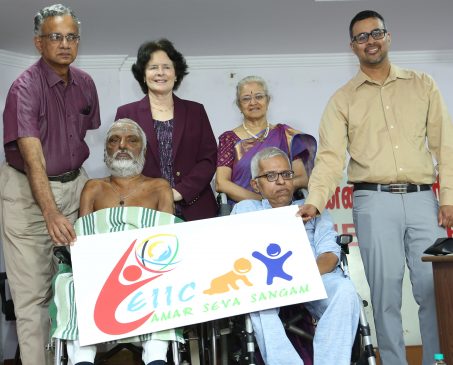 Tamil Nadu Government Increasing Access to Early Intervention
Therapy for Children with Special Needs with an aim to implement
a State Wide Porgramme
 His Excellency, Governor of TN to Inaugurate International
Conference on Feb 14, 2020
 “Globally recognized Early Intervention program by Amar Seva
Sangam” Impacts School Enrolment Rate of Children with Special
Needs to 85%”
Chennai, 10 Feb. 2020
The school enrolment rate of children with special needs improved from 69% to 85%
when they received early intervention therapy, finds a study by Amar Seva Sangam,
Ayikudi (ASSA), a premier non-profit organization in the field of disability management.
The study was conducted in association with the University of Toronto and McGill
University, Canada on the outcomes of ASSA’s Village-Based Early Intervention &
Rehabilitation Programme that covered 1152 children with special needs. The
programme was funded and supported by Grand Challenges Canada, Handi-Care Intl.,
Azim Premji Philanthropic Initiative and the Harvard Centre for the Developing Child.
The program has been awarded the prestigious MIT Solver Award, Vodafone Mobile for
Goods Award, World Cerebral Palsy Day Major Award in Medical / Therapeutics and
the Zero Project Inclusive Education Award to be presented at the United Nations in
Vienna in Feb 2020.
The programme uses a digital application to connect community rehabilitation workers
with rehabilitation specialists in order to provide early intervention therapy to children
with delayed development. This has improved their development and increased their
participation and integration in schools and society. The programme began in Oct. 2014
and has benefited 1152 children with special needs in the district of Tirunelveli, Tamil
Nadu and will continue to enrol new children and expand to new districts in Tamil Nadu.
The programme trained 2771 Anganwadi workers, village health nurses and community
rehabilitation workers in screening for delayed development and screened 52,036
children under the age of 6 in this district. They found a 2.1% prevalence rate of
developmental disabilities. In addition, more than 35,000 people in the surrounding
community showed improved knowledge about child development, early intervention

therapy and reduced stigma as a result of awareness camps conducted by ASSA. The
program showed improved engagement over time with rates of therapy attendance by
children improving from 60% in 2017 to 95% in 2019.
ASSA’s study found that the severity of disability and the lack of early intervention were
the two primary reasons that prevent the children with special needs from attending
schools. The lowest enrolment was seen with children with cerebral palsy (CP),
particularly those with more motor severity and cognitive impairment. Children with
higher early intervention program attendance levels had higher rates of achieving
school enrolment.
Mr. S. Sankara Raman, Secretary, ASSA, said, “Disability is a major barrier to access
to education in India. According to a 2016 study published in the Lancet, there are more
than 52.9 million children under the age of 5 in the world living with a disability, with 12
million in India and 100,000 in Tamil Nadu. There is an urgent need to address this
issue with quality early intervention to support children in the development of physical,
cognitive, emotional, sensory, behavioural, social and communication capabilities and
skills. This would increase inclusion and participation of those children in schools and
society.”
Commenting about the study, and the programme, Padma Shi S. Ramakrishnan, Founder President, Amar Seva Sangam , said, “this program is an excellent model for
adoption by other NGOs and governments both in India and abroad.”
Dr.Dinesh Krishna, the Director of Early Intervention programme for Amar Seva
Sangam stated, that Children in the high programme attendance groups had greater
improvement in “Functional Independence Measure for Children” (WeeFim) and Gross
Motor Function Measure (GMFM). Over time, their gross motor function, cognitive
scores, and their self-care abilities improved. Receptive and expressive speech
improved among all children in the programme. This family-centred programme used
validated scales to measure family empowerment and caregiver strain and found that
parents with medium and high programme participation had a statistically significant
reduction in caregiver burden and improved family empowerment compared to those
with low programme participation. In total, 74% of families had decreased strain, 73%
had improved family empowerment and 62% had improved child interaction.”
With a view to sharing its experiences in early intervention, and to highlight other
successful early intervention models and interventions from across the world, ASSA is
organizing an International conference on ‘Early intervention for children with special
needs’, in Chennai. The two-day conference (Feb 14th and 15th) is scheduled to be
inaugurated by Tamil Nadu Governor His Excellency, Banwarilal Purohit on February
14, 2020 in Chennai.
There will also be two pre-conference workshops on 13 February, 2020 on the topics of:
1) Designing, implementing, monitoring and scaling-up early intervention programs for
children with disabilities, and 2) Home-based early intervention for children with
developmental disabilities and cerebral palsy: A family-centred interdisciplinary
approach.

The International conference will have presentations from more than 50 experts on a
wide range of themes such as early identification, early stimulation, intervention through
play, assistive and adaptive technology, inclusive education, and social security
schemes, among others.
About 500 participants, including the executives of non-governmental organisations,
physiotherapists, occupational therapists, special educators, paediatricians, doctors
including neurologists and orthopaedic surgeons, research scholars, students,
professors, early childhood educators, psychologists, speech trainers, speech
pathologists, family counsellors, funders and senior government officials from different
parts of the country and the world are expected to attend the workshops and the
international conference.
The conference aims to offer a platform for the exchange and adoption of a significant
number of diverse experiences, and best practices in the field of early intervention that
would maximize children’s potential towards inclusion. The conference will also explore
sustainable social development models for overall economic growth through
rehabilitation and inclusion of children with developmental delays in society.
The research findings and the significant positive outcome of this programme has
initiated the State Government of Tamil Nadu to scale up the program by funding Amar
Seva Sangam to expand the programme to cover 3 full districts – Tenkasi, Tirunelveli
and Tuticoirn starting in April 2020. The Govt aims to make the programme available
state wide which will benefit 100,000 children with childhood disabilities.
ASSA is founded and run by professionals in wheelchairs. It empowers children, youth
and adults with special needs through early intervention, rehabilitation, education, skill
development and livelihood solutions in the southern parts of India. For more details,
visit www.amarseva.org