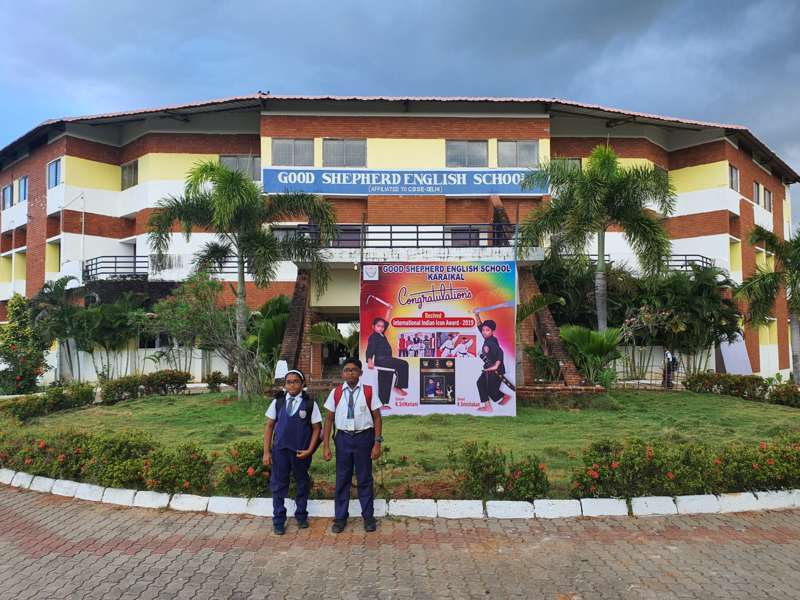 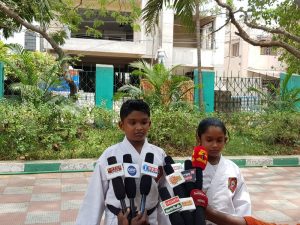 Mr.Muruganandham belongs to Karaikal of Pudhuchery District and his wife is Priya. These couples were blessed with twins around 9 (2010) years ago. In that twins one is a baby boy and a baby girl. The boy was christened as SriVishakan and the girl as Sriharini. During the childhood Muruganandham was very much interested in sports. But he thought that his siblings should make great achievements which he was unable to do in his yesteryears. Then, he admitted both the kids to make exercise. When both were very cute and industrious initially they were sent for swimming class. Later on it was realized that it was not the correct career building for them.
Hence, they were admitted in the Karate Class conducted by Dr.V.R.S.Kumar, Director and great teacher of V.R.S.Martial Arts Academy at Karaikal of Pudhuchery District. From the age of three years both these kids practised the martial arts like karate, silambam, yoga, kick boxing, dekwando and had participated more than 200 competitions both in India and International level within their 9 years of age they acquired two black belts in Karate. Through these competitions both had won various awards, medals in Indian soil as well as in foreign countries and pinned their name in the World Achievement Books. Also, they had been given the Honorary Doctorate by the Pudhuchery Governor and Chief Minister along with various awards. These two studious siblings are studying 5th standard in Goodsheperd High School, Karaikal. In order to honour these kids the School Correspondent Mr.Ranson Thomas and the Principal Mr.Joy Thomas had jointly published a book and make it to be released through Pudhuchery Deputy Governor Ms.Kiran Bedi.
Whilst Priya, the mother of this twins narrating about kids, “From their age of 3 they were attending the karate classes. When these two had practised karate very well and secure black belt in a tender age gives me great pleasure and happiness to me. Along with karate class Sri Vishakan ia also attending chess class and at the same time Sri Harini is very good in drawing and writing compositions in which she is very much interested.
Their father Muruganandham said, “We had divided the responsibility of kids’ karate practice is mine and their education part will be taken care of by their mother. Every day early morning at 5.00 am both woke up and leave home by 5.30am for karate class. All the arrangements for their school would be ready when they return home after two hours. They were also good in their studies and hence they participate in the competitions and won prizes. Whilst they take part in the competition other than their home town, the opponent will be of same weight and age. Sometimes, they also compete with the elders also and win them.”
Whilst discussing with the kids’ Karate Master Kumar he proudly said,”Sri Vishakan and Sri Harini were learning this for the past 6 years and they are very punctual in attendance. It is a great achievement to acquire black belt in this tender age. They had won in various Indian State as well as abroad.”
Please do not get surprise or suspect whether these kids were busy in their daily practices and studies what about their entertainment. They had allotted certain time for that also and both are very fond of karate related action movies.
By achieving these achievements in tender age when they were asked about their future dreams and spontaneously both give different reasons of their dreams. The boy’ SriVishakan’s dream is to get Gold Medal in Olympic Games and to study IAS to become a Collector. At the same time SriHarini also had a dream to win a Gold Medal in Olympic Games.
When her grandfather suddenly died due to cardiac failure and hence, she wanted to proceed medical education and wants to become an expert cardiac doctor to save many more lives.