Educational hubs have a pivotal role to play in creation of a new India, says HRD Minister

Sep 30, 2019 Educational hubs have a pivotal role to play in creation of a new India, says HRD Minister 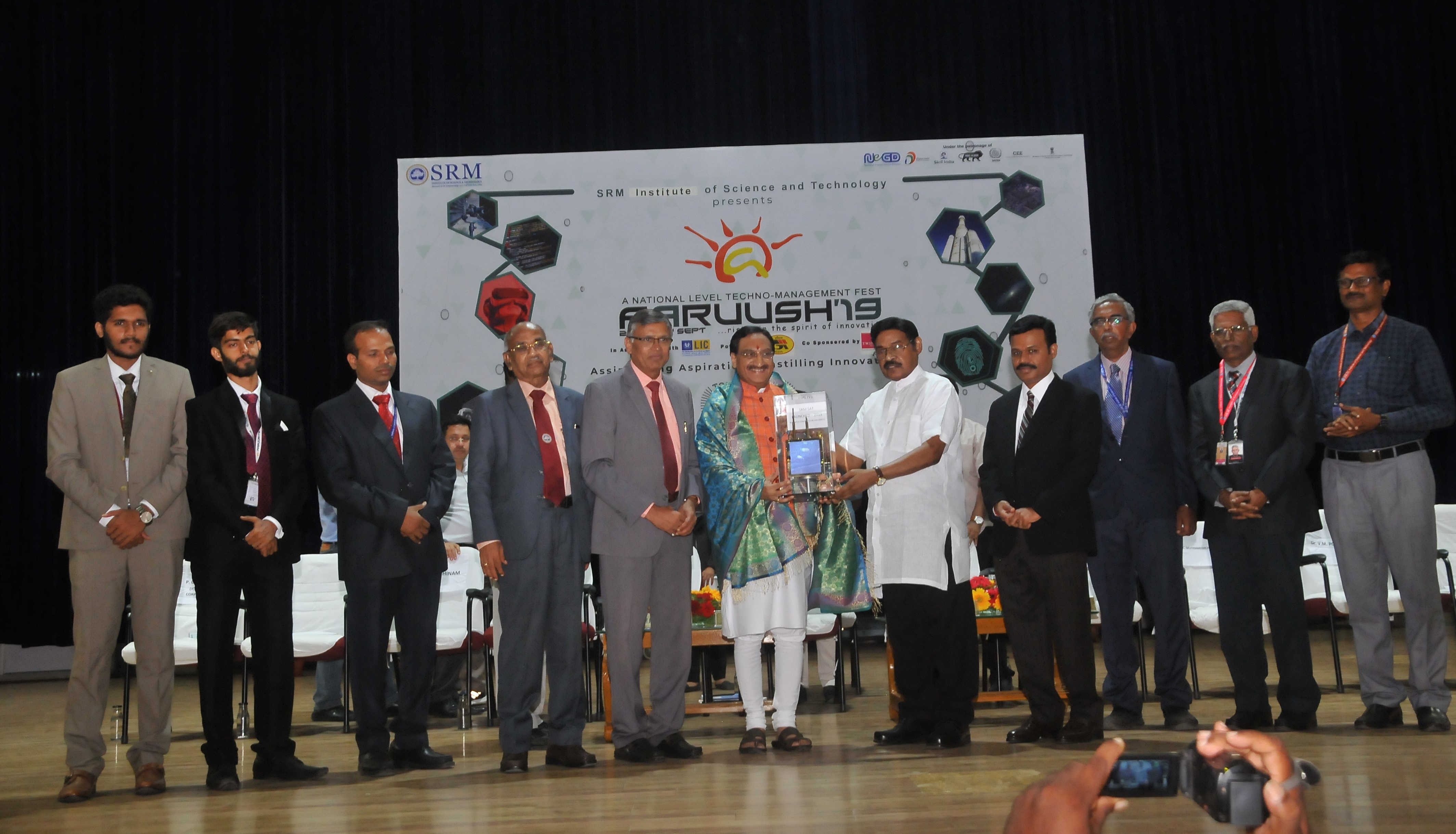 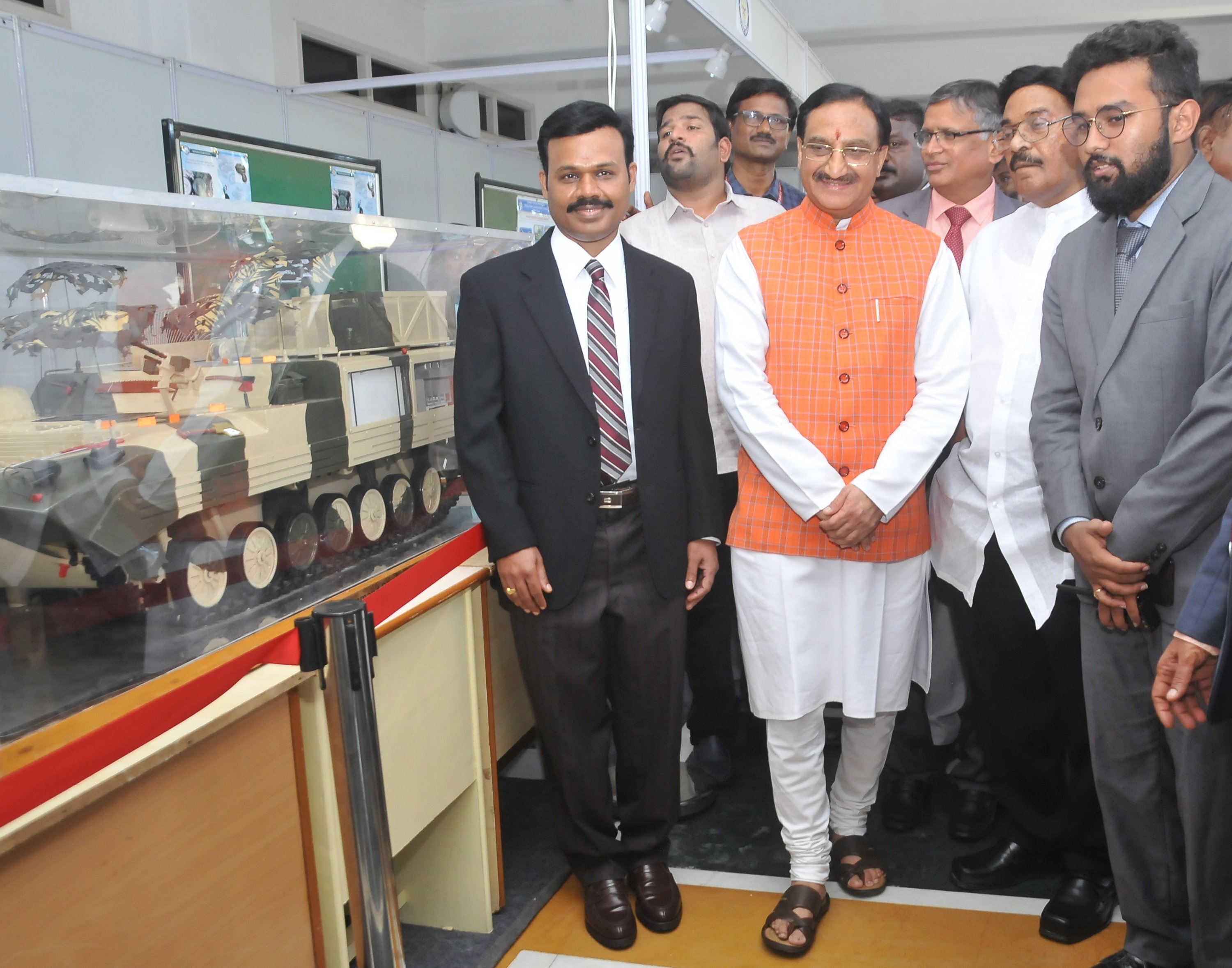 Delivering the valedictory address as the curtains came down on the 13th edition of Aaruush , a national level Techno-Management Fest organized by the SRM Institute of Science and Technology at its Kattankulathur campus, near Chennai, Dr. Pokhriyal said the ‘JaI Anusandhan’ (Hail Innovation) call given by Prime Minister Modi was a progression from the previous slogans of ‘Jai Jawan Jai Kisan’ (Salute to Soldiers and Farmers) and ‘Jai Vigyan’ (Hail Science) coined by his predecessors Lal Bahadur Shastri and Atal Behari Vajpayee. 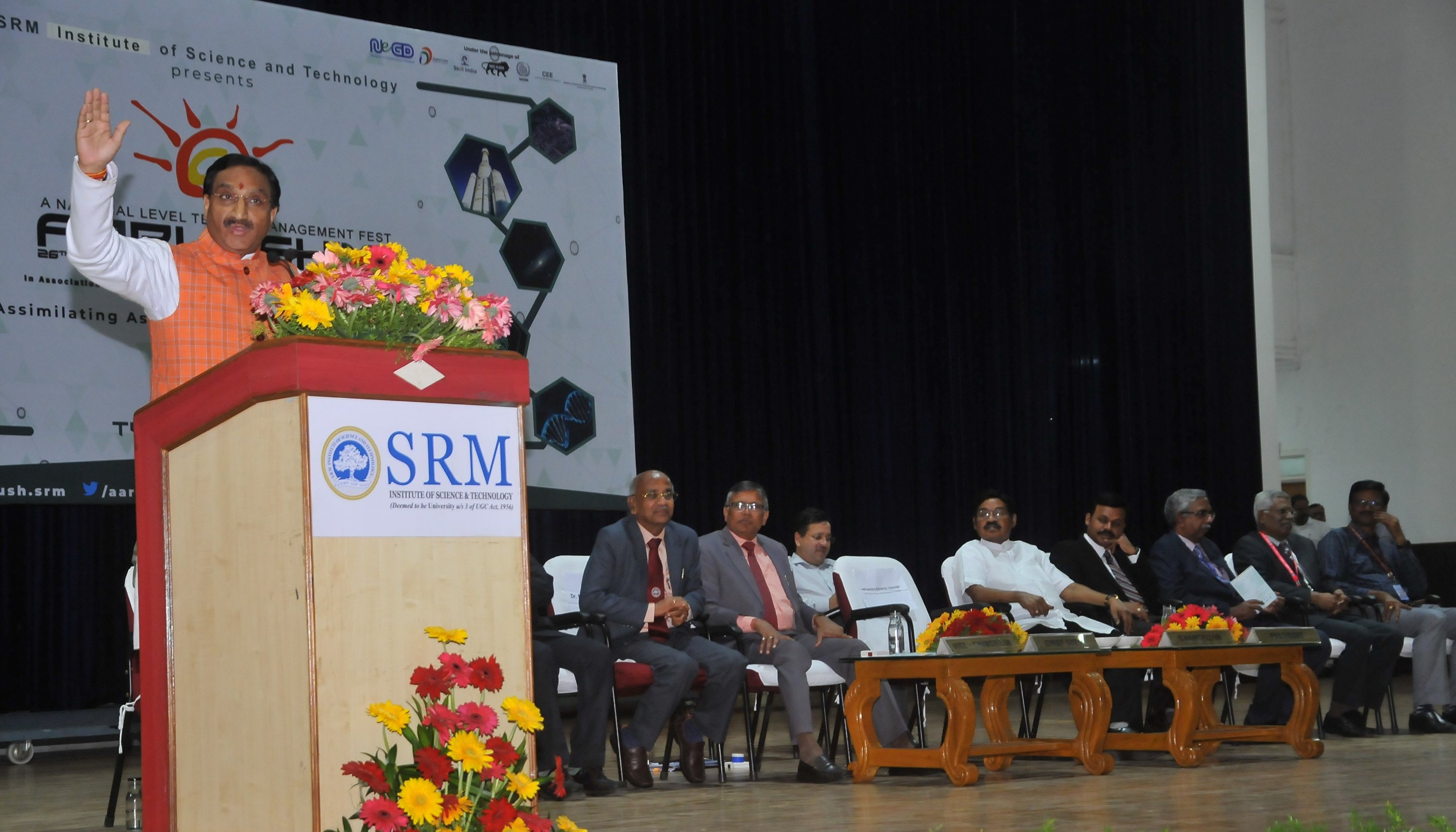 “Institutions like SRM Institute of Science and Technology have a pivotal role to play in realizing the ‘Jai Anusandhan’ call given by PM Modi, “ he said.

SRM founder chancellor and Member of Parliament, Lok Sabha, Dr. T. R. Paarivendhar said the focus on indigenous research and start-ups at SRMIST was crucial to fulfil the objective unveiled in the draft new educational policy of converting educational institutes into research hubs and ‘Make in India’ mission that would result in replacement of ‘Made in China’ and ‘Made in Japan’ labels on products.

You students who came out with innovations, your ideas are great, they are greater than education itself. Dream big to become big, rest not till the dreams are fulfilled. Dr. Paarivendhar said Aarush is a project where student involvement is seen, this is a venue where students display their talent. He said this event is a major one, SRMIST has achievements to their credit like this, one of them is the satellite designed by them. It is still in orbit, he said.

Punning on the meaning of Aaruush as the first rays of the sun and Utsav as a festival, the minister said the techno-management fest was living up to the vision of late Scientist President Dr. A. P. J. Abdul Kalam who had inaugurated the Aaruush Fest in 2007. “Mere Seena mein nahin, tho tere seena mein sahin, Ho Kahin bhi Aag Lekin Aag Jalne Chahi hain, Itna Jala ki Jo Rasta Dikha Saken Ek Ujwal Bhavishya Ke Aur,” (Let there be the fire in you so high that it should burn bright and show us the way ahead), Dr. Pokhriyal told students in his characteristic poetic way reiterating the vision of Dr. Kalam who had great regard for youth and their role to shape the future of India.

“AARUUSH is an event to celebrate new ideas. I am impressed to see that more than 200 institutions are part of this festival,” he said. “Abdul Kalam has been my inspiration and it is because of him that I released a collection of poetry. I think that we should all follow his words ‘We should dream with our eyes wide open’.” He emphased the fact
that education is the back bone for India and it will help in raising our standards, especially in the area of science and technology.

On a jovial note he said, “I see a mini India here. I am impressed to see that SRMIST has students from all the Indian states and Union Territories study. The institution is like a bouquet of flowers. These flowers are not only the future of our family but for India and the country to emerge as ‘Vishwa Guru’ world leader in future. If this has to become a reality, you should be great thinkers.” Recalling the words of Atal Bihari Vajpayee he said that students should think great to have a great future.

“The use of technology has made the entire world into a classroom. You should all be dedicated to find solutions through such festivals. Dedication is important and you should keep in mind your value systems to develop.

Later, he awarded prizes to students from different institutions in the country who had competed in the technical exposition and opened a state-of-the-art Rs. 120 crore
new building, Sir C. V. Raman Research Park, in the campus. Students from 16 IITs and NITs participated in the techno-fest.

SRMIST President Dr. P. Sathyanarayanan said, “Students are propelling AARUUSH in a great way and I wish it will become an international event soon. This is an event that is done by the students, of the students and for the students”.

“Although this is a competition, it is an opportunity to find a career path. This festival is the right environment to do start-ups. In India there are about 25 unicorns and the number will grow in the next five years. Currently India is ranked fouth in the world in terms of start-ups and events like AARUUSH will help build up this number.” He concluded by saying that students are our ray of hope and the future of our nation.

Among those who were present were Vice Chancellor Dr. Sandeep Sancheti, Registrar Dr. N. Sethuraman and Aaruush Convenor Dr. A. Rathinam.