National Family Health Survey-Round 5 for TN, Puducherry Kicks Off from SRM Institute of Science and Technology 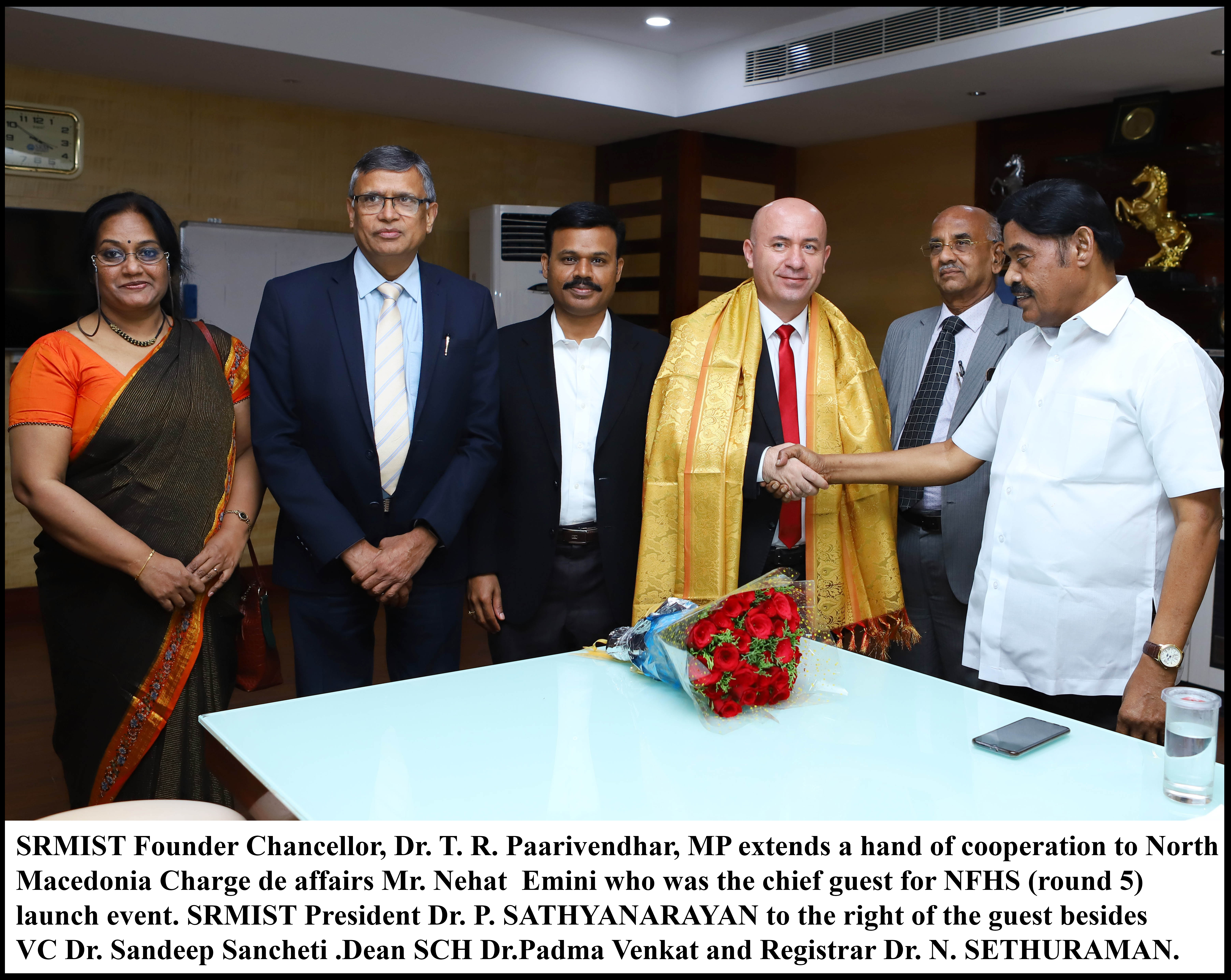 National Family Health Survey-Round 5 for TN, Puducherry Kicks Off
from SRM Institute of Science and Technology

The Republic of North Macedonia has
proposed an exchange of students and professors with the SRM Institute
of Science and Technology to take the bilateral relationship to a new
level. Charge d’ Affaires, Embassy of North Macedonia, NehatEmini, on
Friday mooted the proposal in a meeting with SRMIST Founder Chancellor
Dr. T. R. Paarivendhar, MP, and President Dr. P. Sathyanarayanan.

Noting that the School of Public Health in SRM is one of the top 10
schools in the country, SRMIST President Dr.Sathyanarayan said, “I am
happy that Mr NehatEmini, Charge d’ Affaires is with us today. The
sculpture and heritage of North Macedonia is very similar to India and
I hope we have pivotal trade and education connection between our
countries”. He said it was an honour and prestige that SRM School of
Public Health has been selected to do the NFHS-5. “Normally it is the
government who does such surveys but this has been passed on to a
private organization. This is a privilege for SRM to be designated as
a nodal point for this survey in Tamil Nadu and Puducherry”.
“School of Public Health is a multidisciplinary field as it involves
Management, Statistics, Biology and several other fields. We have all
these under one umbrella in SRM and we have to make use of these
facilities for this survey,” he said.

“I would like to invite students from India as well as professors for
exchange programmes to my country where we have very good professors
with good standing in Europe, as I am deeply convinced that our common
aim is to deepen cooperation in areas of our mutual interest,” said
the Macedonian official who was the Chief
Guest at the launch of the National Family Health Survey (NFHS)
Round 5 for Tamil Nadu and Puducherry at the SRM School of Public
Health, a nodal centre for implementing the survey. The project cost
is estimated to be around Rs. 9 crore.

Dean, SRM School of Public Health, Dr. Padma Venkat, said the North Macedonian capital was Skopje, thebirthplace of Mother Teresa, who had become a legend in India for her
missionary service to heal the sick and the poor. Significantly, North
Macedonia was highly rated on the human development index and had a
rich cultural heritage of music, art, dance and fresco paintings.

SRMIST Vice Chancellor Dr. Sandeep Sancheti called for timely
completion of the survey which would be greatly beneficial to society
at large. He said the SRM School of Public Health should excel in
carrying out its mandate given by the government to change the
perception that societal contribution of educational institutions is
not so strong.