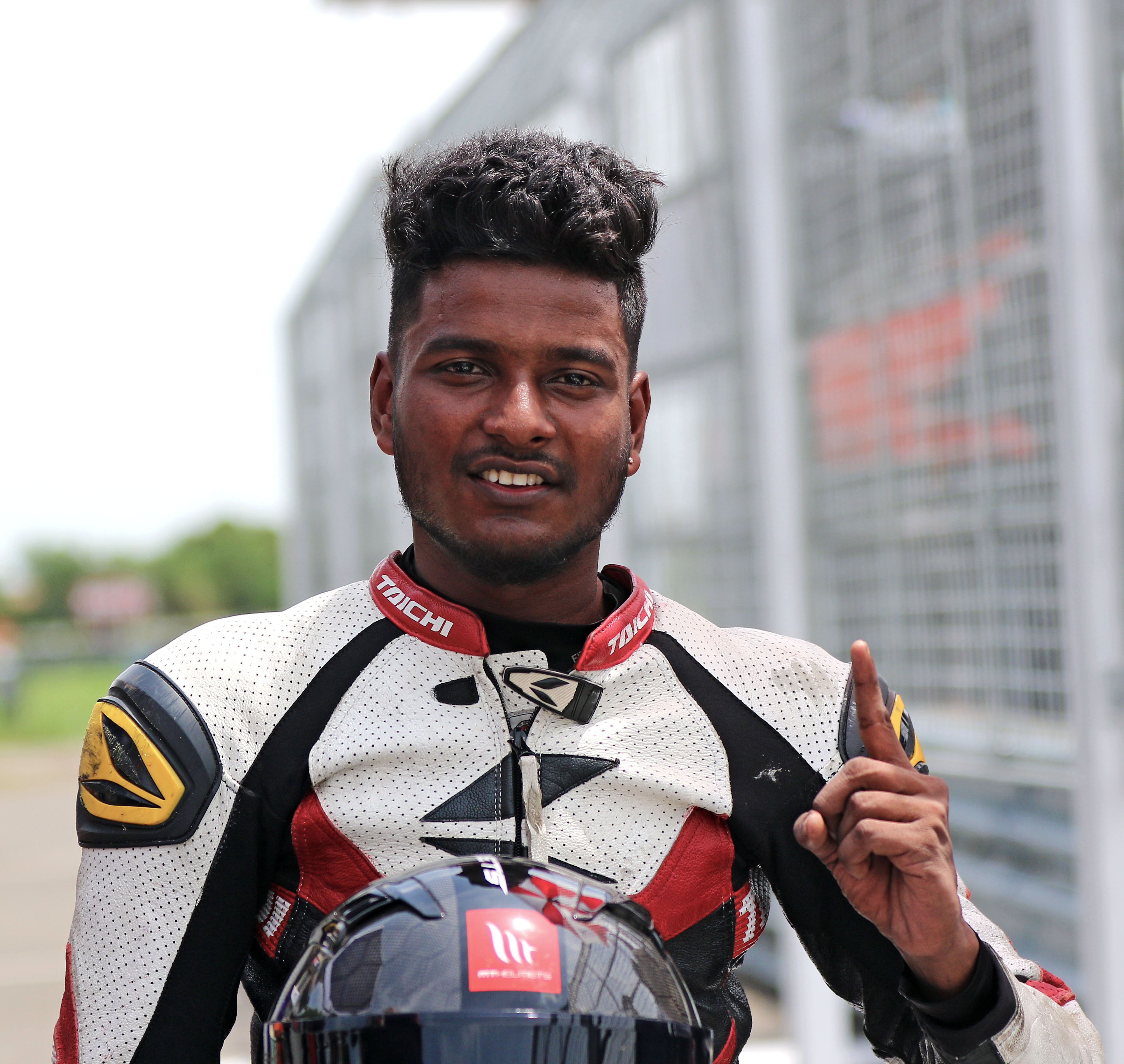 September 7: On a day of serial winners and Honda domination, Deepak
Ravikumar spared the blushes for TVS Racing with a brilliant win in the premier ProStock 301-400cc category to consolidate his top position on the leaderboard in the
fourth round of the MRF MMSC fmsci Indian National Motorcycle Racing
Championship at the MMRT, here today.
While Ravikumar chalked up his third win of the season, Idemitsu Honda Ten10
Racing camp celebrated as Rajiv Sethu (Pro-Stock 165cc) stormed to his fifth
consecutive win in the class and Anish Shetty (Pro-Stock 201-300cc) led a 1-2 finish
with his fourth straight success. Not to be outdone, 22-year old from Chennai,
Venkatesan I (Moto Maniacz Racing) completed a hat-trick of wins to consolidate his
top position in the Novice (Stock 165cc) championship. 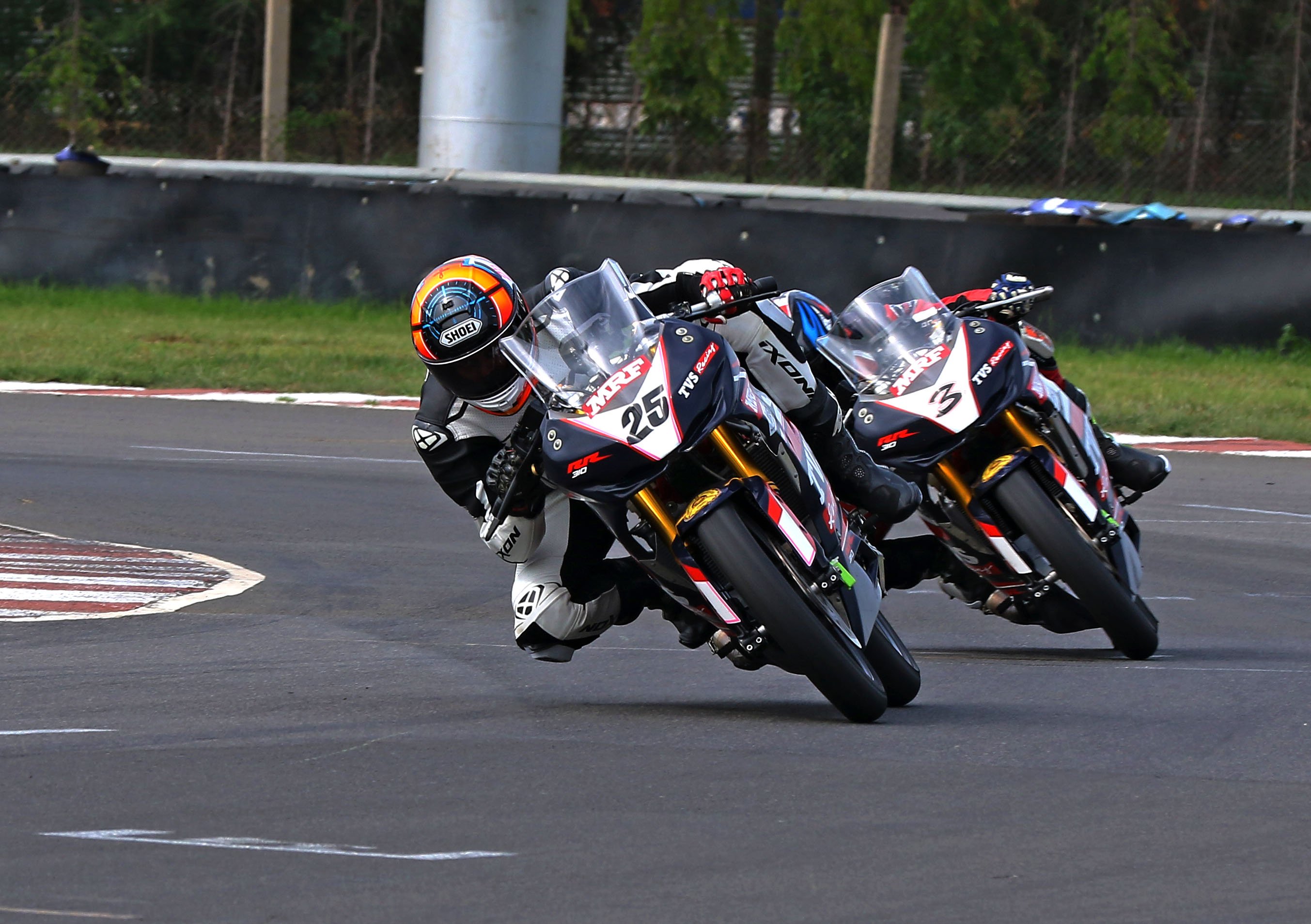 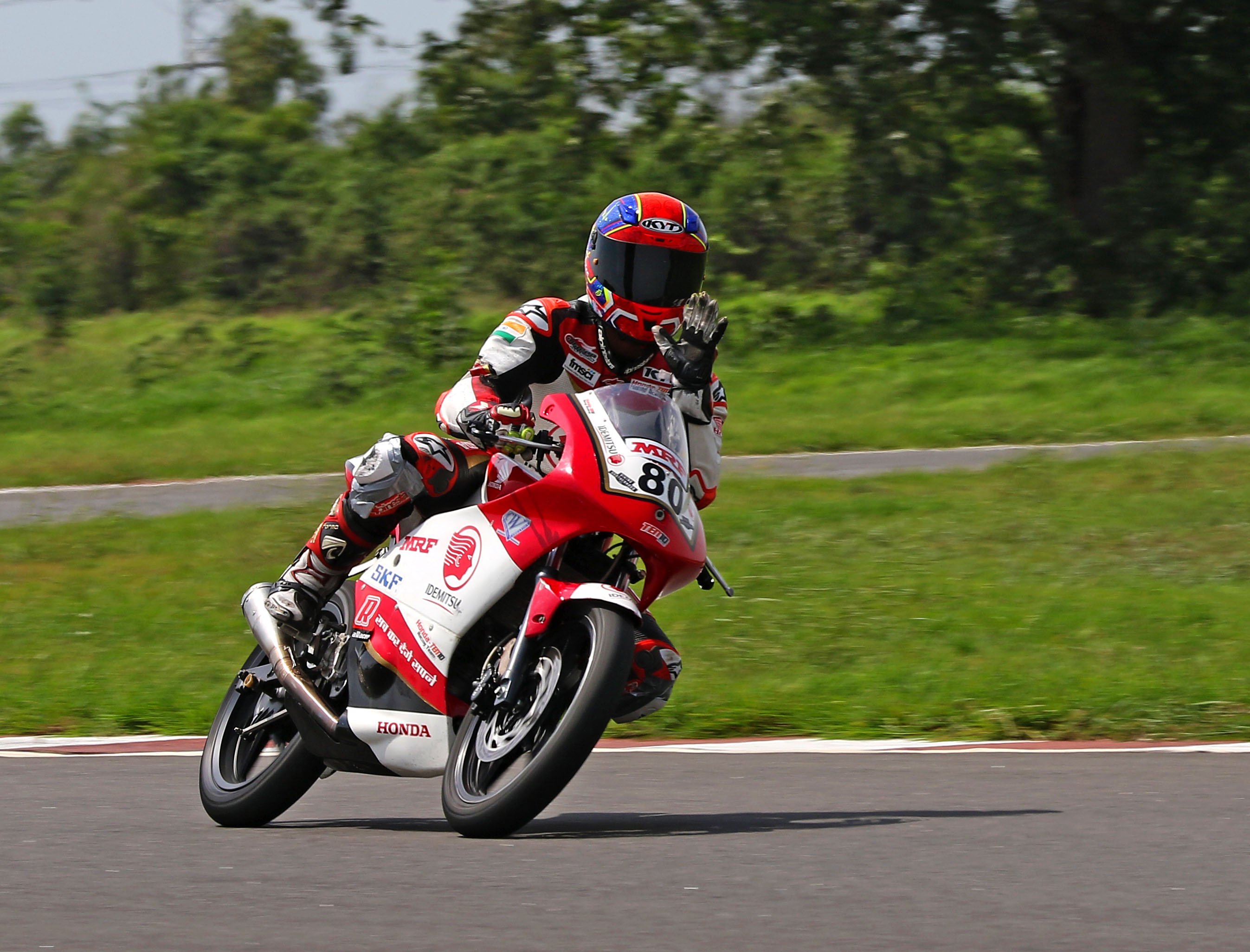 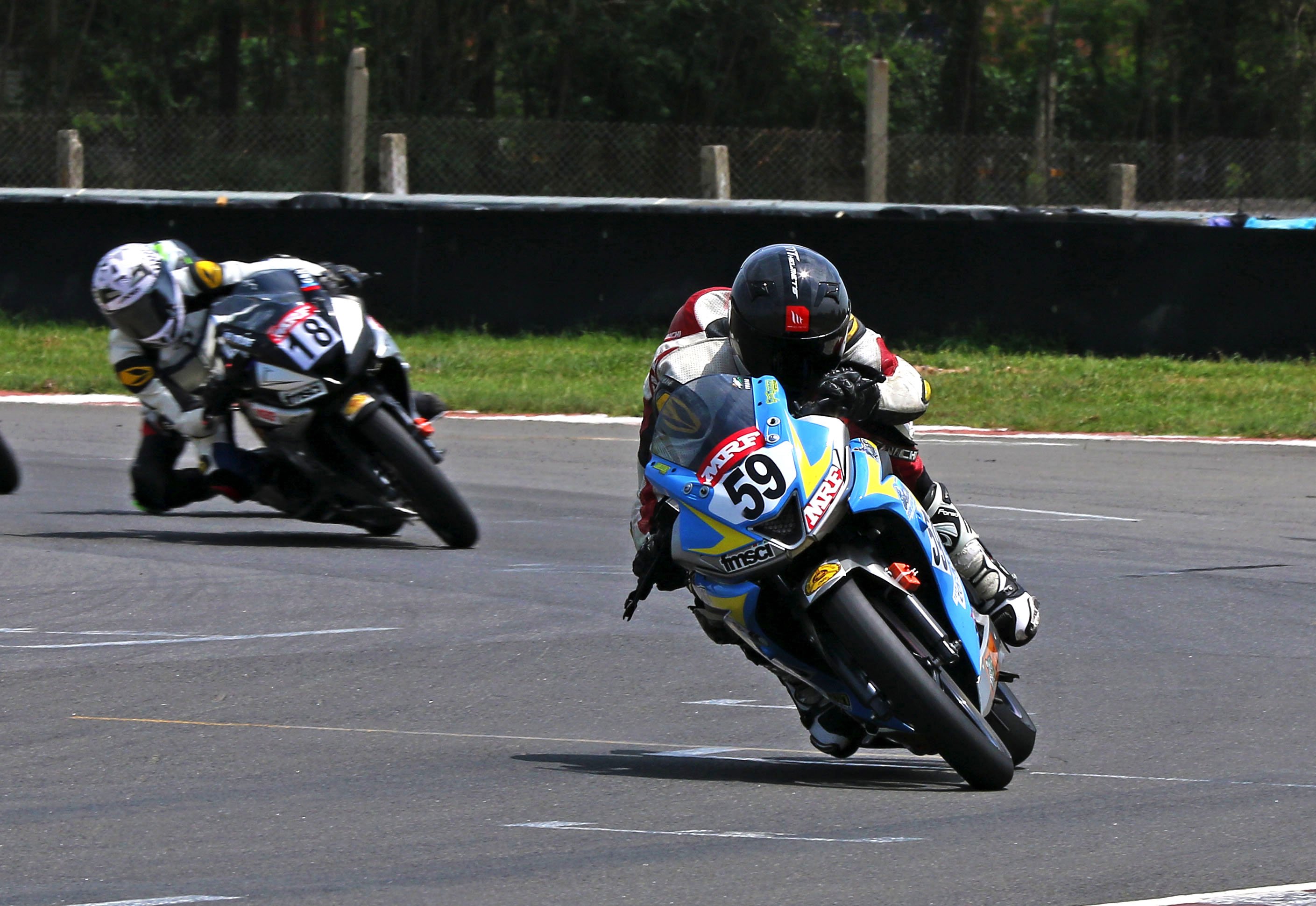 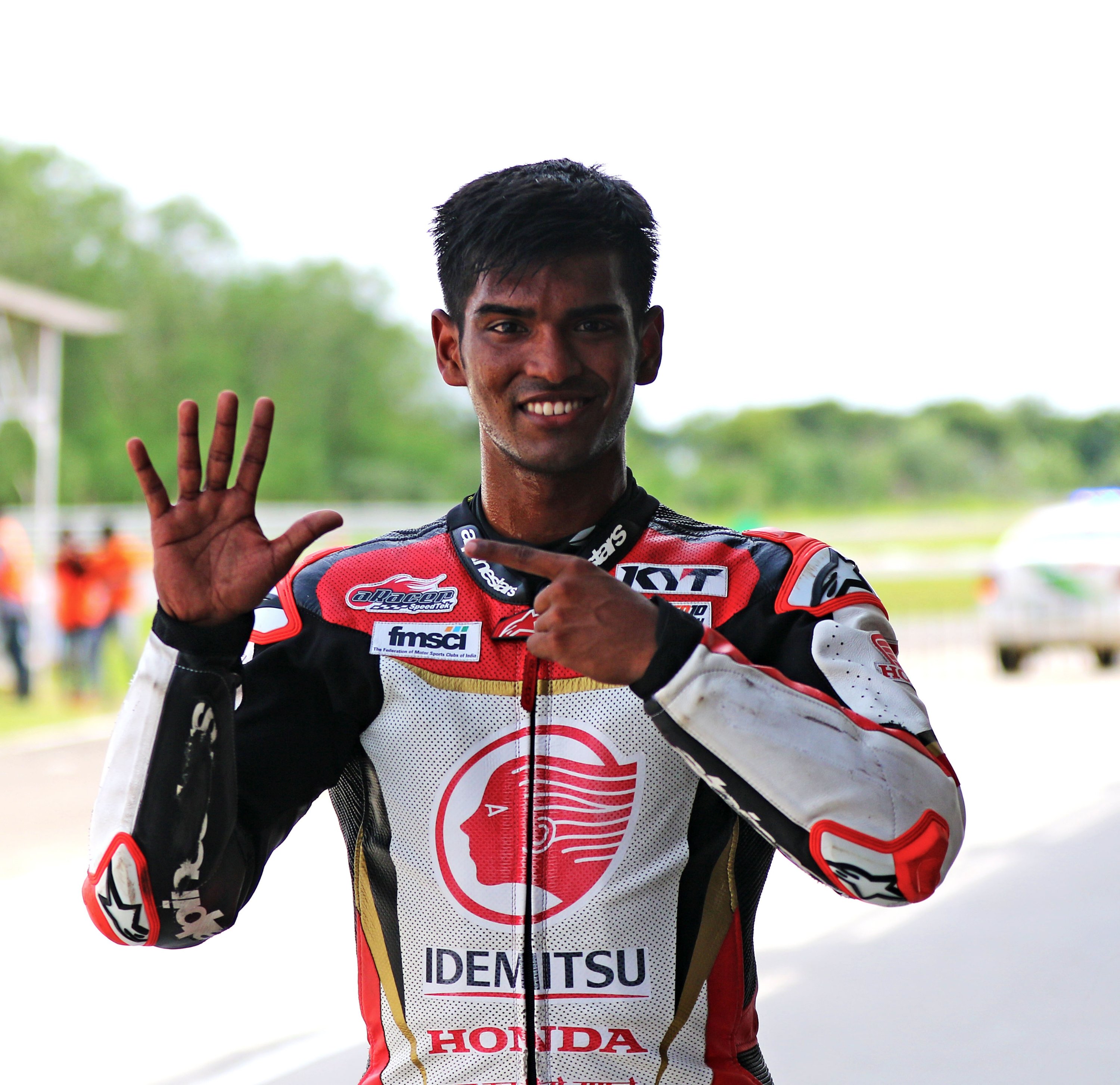 Ravikumar, a businessman from Chennai and a versatile racer who is a familiar
figure on the podium in the National car racing championship, started the race from
P3, eased his way past pole-sitter and team-mate Jagan Kumar and Alishaa
Racing’s Amarnath Menon to hit the front. With Jagan retiring due to a mechanical
issue midway through the six-lap race, Ravikumar opened up a big lead.
However, with two laps remaining, he had to deal with an errant sprocket, but he
managed to nurse the wobbly bike over the finish line, just ahead of Rahil Shetty
(Sparks Racing) and Menon. “For the last two laps, my bike was literally dancing and
I had a tough time to control the machine, but somehow managed to maintain my
track position,” said a relieved Ravikumar who enjoys a 28-point lead over teammate KY Ahamed going into tomorrow’s Race-2.
The other notable win of the day was by international Rajiv Sethu, the 21-year old
also from Chennai. Starting from pole position, Sethu lost two positions in the very
first lap with Jagan Kumar establishing a massive lead. However, Jagan crashed in
the third lap, leaving Sethu, who had fought his way to second spot, in the lead.
Sethu kept his cool despite close attention from Ahamed and team-mate Sarath
Kumar to post his fifth straight win of the championship.
Likewise, Venkatesan had to work hard for his win in the Novice race that was
reduced to four laps from scheduled six following a multiple-bike pile-up immediately
after the start, leading to red flag and restart. After a poor start from pole position