A 29 year old man got a new lease of life after undergoing foot reconstructive surgery at Gleneagles Global Health City. Dasarathi Jawahar an IT professional working in an IT company in MEPZ, Chennai was riding a two wheeler and on his way to his office was hit by an earth mover which was coming backwards. He was pushed off his bike and the there was a partial run over by the vehicle over his right foot near his workplace one year ago. 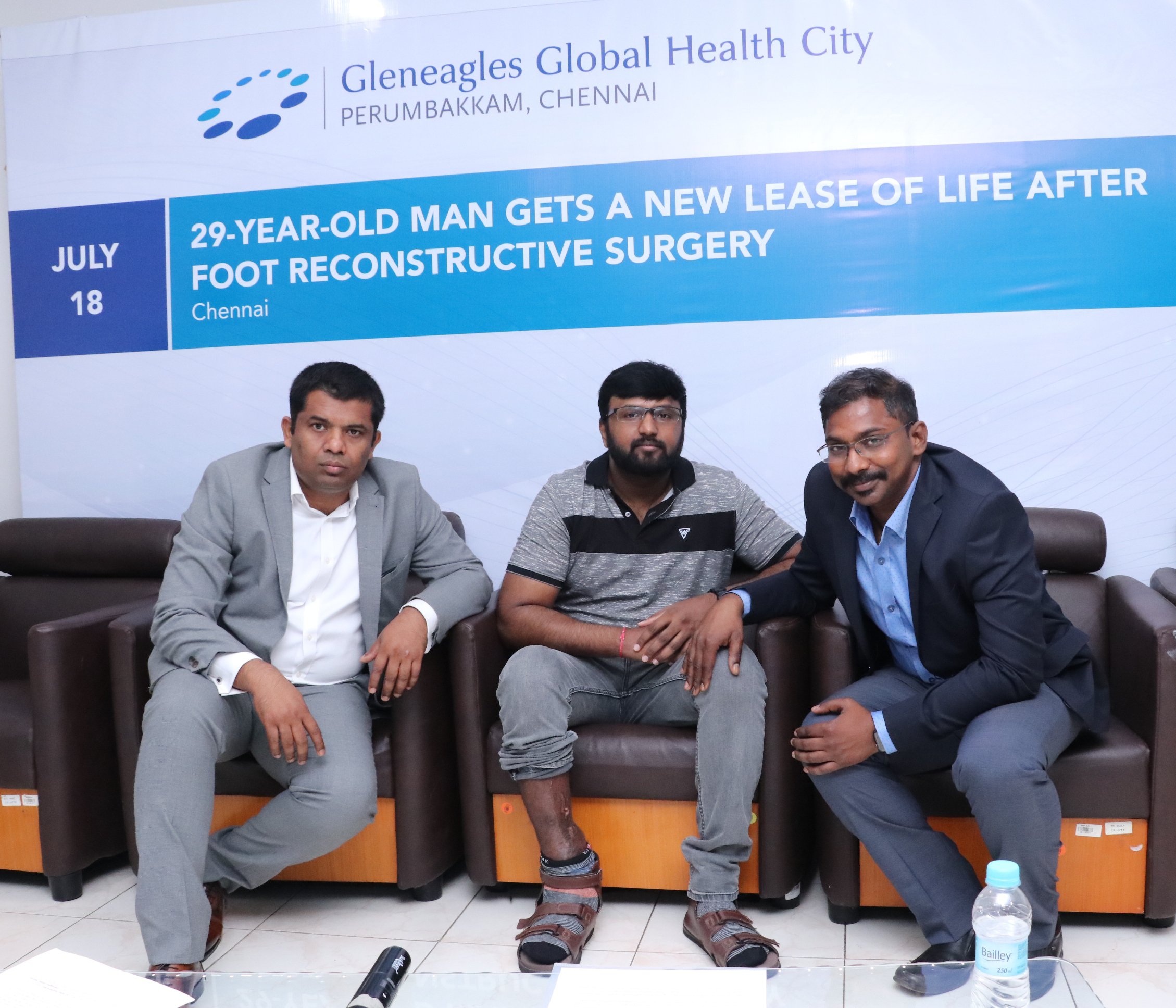 The severity of the injury was very high and the patient was in a state of shock due to massive blood loss and was in severe pain when brought to the emergency room of Gleneagles Global Health City. He had a large wound on the medial and anterior aspect of the foot and lower leg measuring approximately 35* 12cm and his foot was severely contaminated with grease and mud. The foot bones were exposed and were unstable. The blood vessels to the toes were damaged due to the impact and the viability of the toes was precarious.

The surgery was headed by Dr Selva Seetharaman alongside Dr Kesavan, Dr A P Siva Kumar and Dr Siva Reddy. The team of surgeons decided to perform foot reconstructive surgery by using microvascular techniques. Initially the patient was taken for wound cleaning procedure. The wound was cleaned by removing the contaminated particles and the non – viable tissues. The blood supply to the toes was re-established by microscopic reconstruction of the blood vessels. Dr Kesavan helped in stabilising the foot with K- wires and External fixators. Since the wound had a bad contamination, immediate wound cover was not possible. So the doctors continued with wound cleaning procedure till the entire contamination and dead tissues were removed.

Wound closure procedure was done by using flap (tissue with blood supply) from the opposite thigh by micro vascular free tissue transfer. The tissue (flap) from the thigh was harvested with its blood supply and used to cover the wound in the foot. The blood vessels in the flap were joined to the vessels in the foot by microvascular surgery using suture materials thinner than the hair. The entire procedure was done under magnification using microscope with nearly 10 times magnification. The duration of this microvascular procedure was around 8 hours.

Speaking about the complications in the surgery Dr Selva Seetharaman, Head of the Department, Institute of Plastic Aesthetic and Cosmetic surgery, Gleneagles Global Health City said “We considered an option of amputation (removal of foot) taking into account the nature of injury and status of infection during course of the treatment to save his life and avoid any further complications but we continued with cleaning procedures and appropriate
Antibiotics which cleared the infection and the foot was finally out of danger. The successful outcome of the procedure and salvage of the foot was because of the immediate cleaning procedure (Debridement) and the microvascular free tissue transfer” added Dr Selva Seetharaman

The microvascular surgery technique has come as a boon to plastic surgery and has extensive application in Trauma, Cancer reconstruction and in peripheral nerve surgeries. We do the procedure with the success rate of 95 -98 %, matching the international standards. Apart from the medical management, the patient’s confidence and the courage also made a difference in saving his foot added Dr Selva Seetharaman.

Limb salvage of a mangled extremity is a challenging task. Successful limb salvage is a multi-disciplinary team work. Stability of the bones is necessary to provide a strong base for the injured tissues to heal and for return of walking function, eventually.

In this patient, there was loss of some bones in the ankle and foot. Stability was achieved with External rods and pins inserted into the bones, which were removed after the tissues healed. He underwent prolonged Physiotherapy, was made to walk with support of a boot and now, he is back to his day to day activities, successfully. This was possible because of the team work and excellent multidisciplinary support and care added Dr Kesavan, Senior Consultant Orthopaedics Gleneagles Global Health City.

About Gleneagles Global Health City, Chennai:Gleneagles Global Health City, the sprawling 21-acre facility located in Perumbakkam, Chennai is the largest facility of Gleneagles Global Hospitals India. With a capacity of over 1000 beds and accreditations from leading agencies, the facility is Asia’s most trusted and leading Multi-Organ Transplant Centre. The hospital has undertaken several path-breaking Liver, Neuro, Heart, Lung and Kidney procedures. It is recognized by several international and national level accrediting agencies. World-class infrastructure, dedicated staff and a commitment for medical excellence are the USPs of this facility. The hospital has several achievements to its credit and continues to work on several pioneering procedures.

Gleneagles Global Hospitals has multi-super speciality hospitals in Bengaluru, Hyderabad, Chennai and Mumbai. The brand is the most preferred hospital group for multi-organ transplants in Asia region. The parent entity of Gleneagles Global Hospitals is IHH Healthcare, a leading premium integrated healthcare provider with a network of 84 hospitals and more than 16,000 licensed beds. It is one of the largest healthcare groups in the world by market capitalisation and is listed in the Main Market of Bursa Malaysia and Main Board of SGX-ST. IHH is a leading player in the home markets of Malaysia, Singapore, Turkey and India, and in their key growth markets of China and Hong Kong.