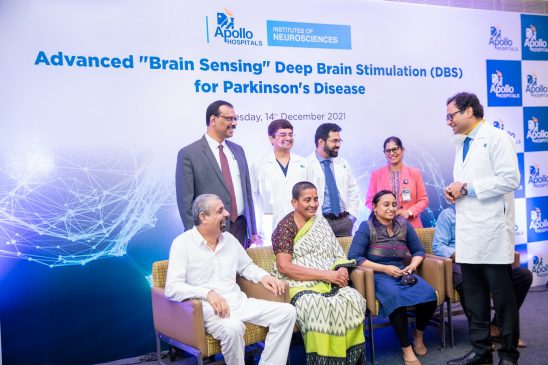 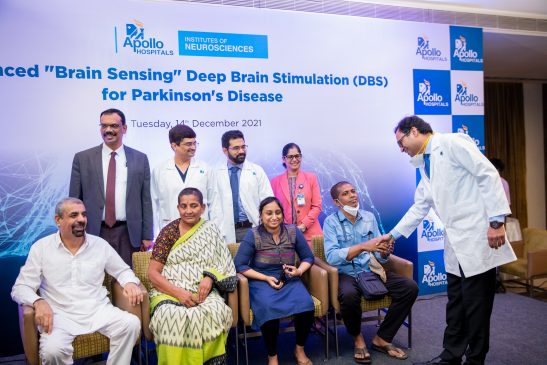 Apollo Hospitals, Chennai today announced the successful use of advanced ‘Brain Sensing’ technology in Deep Brain Stimulation on patients with Parkinson’s disease. Deep brain stimulation (DBS), is a neurosurgical procedure that involves implanting electrodes deep inside the brain to improve symptoms of Parkinson’s disease. The use of advanced brain sensing technologies help in individualized monitoring for effect that maximizes therapeutic outcome. The advanced movement disorders team at Apollo Hospitals performed five DBS surgeries last month, that included four patients of Parkinson’s disease and one with dystonia. All the patients have recovered well with good improvement in their symptoms.

Dr. Vijayashankar Paramanandam, Neurologist, Movement Disorders & DBS Specialist, Apollo Hospitals Chennai said, “The selection of patients for DBS is of utmost importance . DBS can be done for Parkinson’s disease patients, with at least four years of symptoms and four months of motor complications. Patients who require more than 500mg of Levodopa or other equivalent medications may also be considered for DBS. It can improve the symptoms of Parkinson’s disease such as tremors, rigidity, slowness in activities of daily living, dyskinesia’s and can also help to reduce the medication required. DBS is also used to treat a number of conditions, such as Parkinson’s disease, dystonia (abnormal twisting movements), essential tremors, medically intractable epilepsy, and Obsessive-compulsive disorder. We are beginning to see promising results for some conditions like Tourette syndrome, Huntington’s disease and chorea. This treatment is generally reserved when best medical control is inadequate.”

Apollo Hospitals, Chennai has been performing DBS surgery since 2007. Apollo Hospitals, Chennai is one of the very few hospitals in Tamil Nadu with a highly experienced multidisciplinary team for DBS, with Movement disorder specialists, specifically trained functional neurosurgeons, Neuroradiologists, Neuroanesthetists, Nuclear medicine specialists, Psychiatrists, Psychologists, Neurointensivists, Pain specialists and Neurorehabilitation specialist. The team is supported by state-of-the-art technology and infrastructure. This synergy of personnel and infrastructure enables early diagnosis and highly effective treatment to improve the symptoms of patients with movement disorders.

Parkinson’s disease. The neurosurgical procedure involves implanting two electrodes deep inside the brain using advanced stereotactic machinery and computer aided trajectory planning. A pacemaker-like device is also placed under the skin in the upper chest. A wire that travels under the skin connects this device to the electrodes inside the brain. The electrical pulses from the device modify the electrical activity of the affected areas of the brain to produce the desired effect and improve the symptoms. The surgery is performed in two phases on the same day. The procedure on the brain is done under local anesthesia, as the patient is required to fully awake and alert, to provide feedback during operation about the amount of improvement in his/her clinical symptoms. An external programmer is used to adjust and deliver electrical stimulation to the brain, while we assess the effects real time. The procedure on the chest is done under general anesthesia. The positive effect of DBS on the symptoms are much more long lasting than medical treatment.”

V. R. Roopesh Kumar, Senior Consultant & Lead – Neurosurgery, Apollo Hospitals Chennai added, “The stimulation is started only after at least two weeks after surgery. The pulse generator is programmed in the outpatient clinic. Multiple sessions of re-programming, might be needed to arrive at the optimal stimulation parameters. Some conditions like Parkinson’s disease or essential tremors, will show immediate noticeable improvement. In some conditions, like OCD or dystonia, the improvement may take 3-6 months to manifest. While DBS does not cure the disease, it still results in significant improvement of major symptoms. Medications may still be needed. The effect of the DBS may last up to 20 years, which enables a better quality of life for patients during their productive years.”

Many patients also narrated their experiences during the press meet.

Mr. D, a bank manager from Chennai underwent DBS for Parksinson’s disease, with symptoms involving slowness, rigidity, and tremors. Post-surgery, he has had great relief from his symptoms and has even flown to the US to meet his daughter and new-born granddaughter!

Mrs. G, a young mother, presented with abnormal twisting movement of her neck for three years. She had to lie down in bed or keep her neck tightly against the back of her chair to steady the head while working or on video calls. She had to even avoid air travel. These affected her mental state, taking a toll on her professional as well as personal life. After surgery, she has improved well. Her condition arose due to a very rare genetic mutation that has been reported only in 40 cases across the world.

Mrs. T, a 60-year old homemaker from Tirupati presented with typical Parkinson’s tremors and rigidity since 10 years. With waning drug efficacy, her dyskinesia had worsened and she was unable to attend to her daily chores. After a successful DBS

surgery, cutting-edge brain sensing technology is being used to individualise the programming. The patient has improved very well and is very happy with the progress.

Mr. K, a successful businessman from Jaipur who had immigrated to Spain at a young age began developing severe rigidity and freezing episodes even before he turned 40 years. Diagnosed with Parkinson’s disease in Europe, he was put on medications. However, his condition progressively worsened and he had to shut his business. After enquiring across the world, he came to Apollo Hospitals, Chennai where he underwent DBS with great improvement in his symptoms. He is already eager to restart his business in Spain!

Mr. H, a primary school teacher from Bangladesh developed gradual rigidity and mobility issues at the young age of 37 years. Diagnosed with Parkinson’s disease in Bangladesh, he was started on medications. Over time, the efficacy of medication reduced and the symptoms worsened. Crowd-funded by a community of his well-wishers and friends, he underwent DBS surgery and is now doing well with all his symptoms improved after stimulation.

Ms. Preetha Reddy, Vice Chairperson, Apollo Hospitals Group said, “At Apollo Hospitals, we have been performing DBS surgery since 14 years now. Well-established as a therapy for patients diagnosed with advanced Parkinson’s disease, the procedure is now used for many other neurological indications with good success. With one of the most experienced team in South India backed by the latest medical technology, we are sure that we will be able to help many Indian patients with Parkinson’s and other neurological disorders to regain their quality of life.